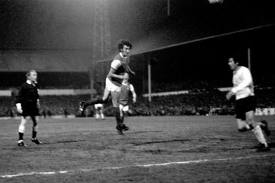 Whatever happens tomorrow, they will NEVER get to do this to us - remember that, Gooners


A couple of weeks ago I opined on here that I felt Arsene Wenger's reign would come to an end after the game tomorrow at White Hart Lane. The results gained in the last fortnight, and the comments from Stan Kroenke (at last, he has spoken about Arsenal) regarding Le Boss' future would seem to put that to bed - though a hammering would create the most immense pressure against Arsene in the media this week. One thing I would like to go on record as saying is that, however much I believe Arsene Wenger has had his time, nothing would give me greater pleasure than to see The Arsenal well and truly spank those muppets tomorrow afternoon.
For a number of years I have viewed the Tottenham fixture as a necessary inconvenience. Since the mid-90's they haven't really belonged on the same pitch as our players. Somehow they have managed to frustrate us far too often, especially at their hell-hole of a stadium, where we've suffered from a number of last-minute disasters costing us the win. Having said that, actual defeat to the swamp-dwellers has been a rare experience. Tomorrow is different. There is no doubt in my mind that Tottenham are the favourites to get a result tomorrow. I wonder how that new pressure will affect their players. Hopefully it will be something they find extremely hard to deal with. If I was offered a point right now I would take it like a shot, but this is a derby game and anything is possible. The last time I really remember games at White Hart Lane being like this, with them being well-fancied, was in 1987, and we all know how the boys won there three times that season. If we can invoke the spirit of David Rocastle tomorrow then a win is not out of the question.
The team news has not been altogether encouraging to me. Having said that, the idea of Alex Song playing at centre-back against Adebayor (more of him at the end of this piece) gives me more heart than Koscielny playing against him. Elsewhere we have no Gervinho, whose ability to run with the ball is a blow in such a game. Theo Walcott has a fitness test to pass, and Wenger's dismissive comment upon Oxlade-Chamberlain would indicate that he is loathe to throw the young boy in to this game. Yossi Benayoun is fit to play and I fully expect him to do so - his hard-working mentality will help whoever plays at left-back immensely, and it will also mean that Arshavin shouldn't be there from the start. There will be a huge reliance on Robin Van Persie and Per Mertesacker to show their experience and leadership. The defence must listen to Wojciech Szczesny. It seems when you watch set-pieces that the defence does not take any notice of him - the goalkeeper is in charge of his penalty area and the rest of the players would do well to listen to what he is instructing them to do. The other key position is in front of the defence. If Alex Song does move back in to the defence Wenger must have no hesitation in playing Emmanuel Frimpong. I know that the young lad is impetuous, but his willingness to put in a proper tackle could be huge tomorrow.
In my piece the other day I said how I would comment on Aaron Ramsey. There's been something bugging me for over a month with Rambo and I have to say something about it. Over the past couple of years Denilson has had a number of criticisms levelled at him, one of which was the fact that he always passed the ball sideways, or backwards. I would urge you to start watching Aaron Ramsey closely. I think the stick taken by Denilson may have been a little unfair - if Ramsey is doing the same things then it would appear they may be acting under instruction. The problem is that with Ramsey playing this way it simply serves to slow us down - again something Denilson was accused of doing. When we have got in behind teams this season it has been because we've gone at them quickly, using the pace of Gervinho/Walcott to cause damage before the opposition can get organised. The same thing applies when Tomas Rosicky plays, which is usually when Ramsey doesn't. Can you see a pattern emerging? The game tomorrow will see Arsenal needing to play at a high tempo, and Ramsey's passing ability will need to be at the forefront of this. Let's hope he abandons the sideways nonsense and moves the ball forwards to greater effect.
I've not mentioned Spurs' players in this preview, and I don't intend to give anything by way of praise to any of them. We know they have better players than they've had for quite some time, and we know that some of them could damage us. The most frightening individual, of course, is Adebayor. He has a fine record in this fixture and there is every chance this will continue. However, I think that his Tottenham career will begin to reach its conclusion tomorrow, whatever the result. The way I see it is that he will either score the goals that win the game for Spurs, thus becoming a hero to the neanderthal knuckle-draggers, and then revert to being the lazy layabout we all know him to be, OR, he will miss chances that cost Tottenham the game and their fans will turn on him as the Gooner scumbag that they all know him to be. Let's hope and pray it's the latter.


One more thing to say: COME ON ARSENAL.
Posted by DvbrisG at Saturday, October 01, 2011