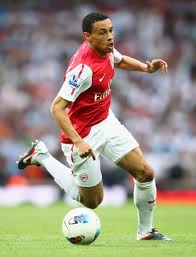 Francis Coquelin - magnificent at that dump

First let me say that I didn't think we deserved to get beaten yesterday. Yes, Szczesny had more saves to make than Friedel, but Arsenal's play was far better than Tottenham's. Ultimately, of course, the only thing that matters is the final result, especially in a derby game. Sadly that means we lost to Droopy Face's scumbags again.
Before I get down to analysing the performance of some individuals (I don't propose to review the game as such as we all saw it and it was over 24 hours ago as I write) it would be remiss to not comment on the opening goal. It was handball by Van Der Vaart. It was as clear as day. Gary Neville saw it from the commentary gantry, yet the referee and his linesman chose not to see it - I use that turn of phrase deliberately as I don't believe for one minute that one of them did not see the handball, they simply chose not to give it once the ball hit the net. It was as scandalous as the red card that cost Everton their derby match on Saturday.  I couldn't believe Glenn Hoddle maintained it wasn't handball at half-time. I can only assume he was looking at it from behind Eileen Drewery's healing-hands. I also wanted to shake Alan Smith for not being irate at the decision - can you imagine Charlie George's reaction if he'd been in that studio? I am sick of refereeing decisions being a major factor in results involving Arsenal. As bad as the performances and results have been since February, I would seriously have to question how much better things might have looked with correct decisions being made in our matches (that is not excuse the way the team has played, or the way in which the Manager has done things, but merely to make a point).

Now, what about the players yesterday?

Wojciech Szczesny was at fault for the winner, I have no doubt about that. He was slow to react, in my view. I know the ball moved on him somewhat, and that is probably what beat him, but he seemed to be not quite concentrating properly. Just imagine what Arsenal fans would be saying had Almunia or Fabianski let that goal go in. Apart from that he was excellent.
I thought the back four didn't do all that badly on the whole. Alex Song recovered from an awful start to the game and played quite well. Mertesacker was also quietly efficient. I can't, however, excuse the moment when they left the ball for eachother just after we went 2-1 down. Such lapses in concentration are exactly what continue to cost us on so many levels. Kieran Gibbs had a fine game, I thought. On the other side I felt Sagna was poor in the way he covered his centre-backs throughout the game, though you didn't really see Gareth Bale for most of the match. The broken leg to Sagna was yet another critical blow to a team that really doesn't need any more bad news. Once again it was a needless foul, which caused Sagna to fall awkwardly, yet Arsenal were awarded a throw-in - quality refereeing yet again.
In midfield Arsenal were pretty dominant, for me. However, this was entirely down to Francis Coquelin. What a great performance from the youngster. He played Spurs on his own in that midfield area. Arteta was completely anonymous, and his lack of pace was evident on so many occasions. It's easy to see, perhaps, why he gets nowhere near the Spain squad. On Saturday night I wrote about Aaron Ramsey and his Denilson-esque passing this season. It was clearly evident yesterday throughout the game - even in injury-time when we were losing. He got our goal but his performance was a disgrace. Most shocking of all was how he watched Sandro literally walk in to space to receive the throw-in that led directly to the winning goal. It was absolutely scandalous and he should be dropped for that alone. People moan about the laziness of Diaby and Denilson, but Ramsey is seriously walking the same tight-rope.
The less said about the three attackers the better. RVP produced one moment of any threat and Gervinho should have buried the ball in to the open goal he created for him. As for Walcott I would have to ask exactly what Capello saw yesterday that warrants him getting a place in the England squad.


It seems a bit strange having commented like that to still think we didn't deserve to lose. That only serves to show just how poor the opposition were I suppose. That, in many ways, is the most annoying thing. Tottenham were rubbish, and yet we couldn't beat them. We had them rocking early in the second-half, only to let them off the hook.
Wenger says we "played with the handbrake on." What? What exactly does this mean? It's yet another soundbite from Wenger designed to fill space without ever addressing the problems he, and he alone, is creating. What about the substitutions? Tottenham brought on Sandro to add some physical presence in midfield. Surely Arsenal had to respond in kind by bringing on Frimpong for Arteta or Ramsey. Instead we saw Spurs come back in to the game. That change from Twitchy changed the course of the match. It was simple and obvious, and yet Arsene failed to respond yet again. When Sagna got injured he could still have brought on Frimpong and moved Coquelin to right-back - it was a wasted substitution.
There were further issues before the end. We had a centre-forward on the bench yesterday, yet he stayed there when we were losing. If Nicklas Bendtner had been on the bench he would have been introduced instead of Arshavin, so what is the point of Chu-Young Park being at Arsenal? It seems obvious that the Manager doesn't trust him enough to give him a game, even in a desperate situation like the one we faced yesterday. I would question why Bendtner is playing for somebody else when his replacement is not considered good enough to even get on the pitch when we need to try everything to score a goal. Instead of getting a centre-forward on we had Per Mertesacker going up front. I am convinced the German took it upon himself to go forward, and rightly so - somebody had to do something. Sadly his teammates completely ignored the move and kept playing the short passes instead of lumping a few balls towards the big man and putting one-leg Ledley under some pressure for a change. Even in the final minute, when Szczesny came up for a corner, four Arsenal players remained outside the penalty area - three of them around the halfway line.


I thought, as I started to write this tonight, that I wouldn't be doing too much criticising. I was obviously quite wrong. I will just finish, however, by defending Arsene Wenger over something. I see there has been some controversy because he didn't shake Clive Allen's hand after the game. I don't blame him. Quite apart from the fact that Clive Allen is a grade-A Tottenham c**t, he is also the same person who pushed Arsene at the derby match a couple of years back (and got away with it). He is also one of about 37 different coaches that hang around the Tottenham team claiming to have a job, when all the while they are really just Redknapp's mates. How many hands do you have to shake for goodness sake? Clive Allen is a cretin who won naff-all in his career. He is everything that sums up a Spurs fan - jealous of the success that Arsenal have had.
Let the mugs have their moment, they've beaten us again. But just remember that banner that the Gooners unfurled before the game urging the mugs to enjoy the Golden Jubilee of their last League Title win. They are forever in our shadow.