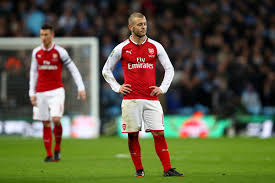 At least he tried

For 20 minutes Arsenal were the better side without being spectacular. We had an open goal early on that might have put doubts in City's minds after their loss at Wigan but Ozil chose to pass (yet again) rather than bury the chance. Aubameyang should still have scored but Walker was able to get back showing the sort of desire to stop a goal that our players so sorely lack. We should have known things were going to go from bad to worse when Nacho Monreal  had to go off injured. Despite that we were properly in the game at half-time despite being a goal behind. Now let's be clear, Aguero did foul Mustafi as the ball came forward. However, let's not allow that to deflect attention away from what Mustafi was doing. He had chosen to stand 5 yards the wrong side of the best centre-forward in the World. If he'd been in the position he should have been it would have been a simple header but he had allowed himself to get under the ball. It was scandalous defending. For all Manchester City's famed good football it took one long punt down the middle to undo Arsenal. Again. That the same thing happened on at least two other occasions in the game says it all about our players and the way they are managed. Mustafi makes people like Caesar, Cygan and Stepanovs look top class. The man cost Arsenal £35m yet defends like a pub player.
Let's get to the bones of it now. What goes on in the Arsenal dressing room at half-time these days? Just like the Spurs game a couple of weeks ago they walked on to the field for the second-half but weren't actually there at all. We simply didn't play the game after half-time. The most sickening thing is that City, the best side in the country, didn't even have to play well to hammer Arsenal. It was embarrassing and it was humiliating. We've seen many scandalous performances from Wenger's Arsenal in the last 10 years, but none in a Cup Final. No amount of apologies, or "we'll learn from this" can ever make up for what went on  at Wembley yesterday.
When Wenger can't even drag a performance out of the players for a Wembley showpiece then even the most die-hard of his cult worshippers ought to be able to see it's finished. Only Ramsey and Wilshere looked interested yesterday, with Ramsey outstanding as far as I was concerned - especially in the first-half. But what about our two superstars, for example? Ozil has gone back to the lazy, do nothing, player he's been for 3 years in the weeks since he signed his new contract. That's no coincidence. Aubameyang was taken to school and allowed himself to be bullied by Vincent Kompany, even down to being out-paced by him on at least one occasion. Is that what we paid £60m for?
We know this can't go on. We also know that it will go on. At least until May, and probably for at least another year after. Clearly the best thing for Arsenal would be for Wenger to go now so we still have a chance to win the UEFA Cup this season. That isn't going to happen and we will be embarrassed once again by a seemingly resurgent AC Milan side. Kicking the can down the road does no good for any of us but, until Gazidis can persuade Stan Kroenke of that, it's only going to get worse. I really can't be bothered to even get angry about it anymore.

It was all going quite well


I’m not sure what’s the worst thing about losing to that lot these days. There’s the annoyance and anger at being beaten. There’s the predictable gloating from a set of supporters whom live for Tottenham beating Arsenal occasionally, simply because they don’t know what it’s like to actually win trophies. Then there’s the lazy journalistic nonsense that seems to follow this fixture around when Spurs win it describing a “power shift” in the area - I’ve never seen this discussion around the Manchester clubs, yet City actually have silverware backing up a genuine on-field superiority over Manchester United. The media fawning over Tottenham this last couple of years is beyond embarrassing. It underlines an absolute bias towards them for a reason that is scarily unknown. It will ever be thus until the print media, in particular, is finally consigned to history. Journalists today have set themselves up as “experts” as they see the impending Armageddon on the horizon and appear of TV and radio to give commentary on the game. The fact is that none of the “football writers” know more about football than you or me as they’ve never played the game, just like us. Add in their smugness and contempt for Arsenal FC and you have a vicious cocktail to contend with. The sooner Arsenal realise that they don’t need to engage with newspapers outside of Islington, where they have a community responsibility, the better off we will all be. You might have guessed I’m not a happy bunny writing this morning.
In the game yesterday I thought we were quietly impressive before half-time. Three or four times we should have done better on the break - criminally bad passes in to the final third when you have the pace of Aubameyang going beyond the defence is hard to accept from players like Ozil and Mkhitaryan. Watching the Armenian yesterday it was easy to see why his career at Manchester United wasn’t successful - compared to last week it was like seeing a different person in an Arsenal shirt. Ozil was wasted out on the right and only looked like doing anything when he drifted towards the centre - for once I won’t criticise him for a quiet(ish) display when he was ridiculousy moved away from where he does damage. Our key man was, yet again, Jack Wilshere and he created what would have been a goal when he put Aubameyang through on goal, only for the linesman to wrongly raise his flag. We were fairly comfortable elsewhere with Elneny and Xhaka doing a decent job in front of the defence, and Bellerin looking pretty solid at right-back. Half-time, 0-0, probably shading things, there were reasons to be content.
You have to wonder what happens in Arsneal’s dressing room at half-time these days. Within seconds of the restart yesterday you could see we weren’t on it as we had been before the break. Mustafi had to make a good block (and generally did well yesterday I felt) before Cech got stupid and took on Harry Kane in our penalty area. It all pointed to a casual approach. Less than a minuted after Cech’s Beckenbauer impression we were losing. Nobody closed down the cross which was perfect for Kane to attack. Koscielny is finished and never got off the ground - Monreal waving his arms for a foul was nonsense as Kane just got up first and stayed above the Arsenal defence. What came after, until the last five minutes, could have been embarrassing for Arsenal. Were it not for Cech (the save from the free-kick was superb) and Tottenham’s bad finishing we could have lost by 4 or 5 goals.
Wenger made his substitutions, rightly taking off Mkhitaryan and wrongly taking off Elneny (instead of Xhaka) to bring on Lacazette and Iwobi. Inexplicably Iwobi played through the centre and Ozil stayed on the right. Just as inexplicably our new £60m centre-forward (100 goals in 117 games) was sent to the left wing as Lacazette was left to play on his own up front. We’re 0-1 down to Tottenham and we stay with one man up front, a man with 1 goal in his last 12 games. It is beyond the wit of sane people to understand what goes on in Wenger’s mind. Eventually he introduced Welbeck (5 minutes from time) and we got on the front foot as Spurs started to panic about not being out of sight. We managed to create two chances, at last, but they both fell to Lacazette. The first wasn’t easy but he had time to bring it down rather than smash a difficult volley in to the crowd. The second was just terrible finishing after Iwobi’s pass found him through on Lloris. I’ve seen people saying Wenger has damaged his confidence in the way he has handled him this season, and I have some sympathy with that viewpoint, but the fact remains that a £50m striker should be scoring in that position - he certainly shouldn’t be missing the target. You have to feel that Aubameyang, with his extra pace, would have scored the goal as he’d have been there a yard quicker and would have had a choice in how he finished it. I’m not going to get at Lacazette as some have, but it’s hard to ignore that he hasn’t succeeded this season since arriving. I’m yet to be genuinely impressed by him at any point. He also got himself offside 3 times yesterday through sheer laziness and that is unacceptable.
So another defeat on the road. In this case it matters more because of who we were playing. It’s obvious how this must come to an end but we will have to wait until at least May before that happens. In the meantime we will continue to drift in the Premier League and must hope to win the League Cup and do something special in Europe - given Wenger’s comments about the Europa League on his BT Sport pre-match interview yesterday I won’t be holding my breath.
Posted by DvbrisG at Sunday, February 11, 2018 11 comments: