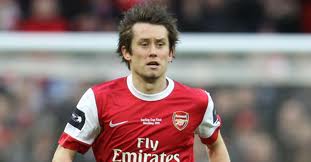 Rosicky - rolled back the years this afternoon


Robin Van Persie will get all the plaudits from today's match thanks to his two goals, and deservedly so I suppose. In fairness to Van Persie his all-round display was outstanding, and his chipped attempt after ten minutes was like watching Dennis Bergkamp again (though Dennis would have found the corner!) However, the stand out player for me today was Tomas Rosicky. He dominated his area of the pitch and got us going forward more and more in the second half. The decision to substitute him, while leaving the likes of Walcott and Arteta on the field, was stupefying. Back in the Carling Cup Final Tomas played the full game despite being Arsenal's worst player on the day, by quite some distance. I have given up trying to work out what goes on in Arsene Wenger's mind, but Arsenal got the points despite such madness, so we shouldn't complain too much. It's been a long time since I've seen Rosicky taking people on and beating them, gliding through the midfield and showing a turn of pace I thought long forgotten. Sunderland had seemingly no answer to "Little Mozart," other than to trip him, and it really was like watching the man we signed back in 2006. As you might have guessed from my eulogising I am pretty happy for Tomas, and happy for Arsenal. I hope it wasn't a flash in the pan and that there will be an Indian Summer to the Czech's injury-blighted career.
Elsewhere in the team I thought Song and Koscielny were also outstanding. Song was certainly far more dangerous going forward than Arteta, and did his defensive job well also. The only thing to say with Song is that he was fortunate to stay on the pitch near the end when Howard Webb simply showed how incompetent he is by failing to punish a deliberate handball and then a shirt-tug on the halfway line (Wes Brown should already have been long in to the changing room, and we should have had a penalty when Michael Turner pulled the ball away from a goal-bound Arshavin with his hand). Song was all action today, and I don't understand why elements of the crowd get on his back as soon as he misplaces a pass. Koscielny showed again that he has some good defensive qualities when he puts his mind to it - one block in the final minute was a display of proper commitment, summing up his performance on the day.
There were, as ever, some negatives. One was Mikel Arteta who was absolutely non-existent in midfield. Another was Theo Walcott who serves only to infuriate most of the time. The other negative might come as a surprise to many, but it is Wojciech Szczesny. Before you scream at your computer please read what I have to say. At Old Trafford Szczesny was twice beaten by free-kicks. On both occasions he had taken up a bad position to one side of his goal, leaving too big a target to be exploited. The Pole has failed to learn his lessons and was again beaten today because his positioning was all wrong. I remember David Seaman being beaten by Ronald Koeman when playing for England because he left half the goal open and Koeman was able to score. David Seaman never allowed that to happen again. You would have to question what analysis is done by the coaching staff - surely someone must have seen this happening again some time soon? Szczesny redeemed himself with an incredible save shortly after, but such errors of judgement must be eradicated.
The only other disappointment to me was yet another injury to Kieran Gibbs. I think the lad has been really good in his last few matches, recapturing the kind of form he showed when he first broke through a couple of years back. Sadly for Kieran he is incapable to staying fit for a good run of games. It is a shame because we all want to see players that have come through the ranks playing in the first-team. I would love for Gibbs to make the left-back position his own, but all the time he remains injury-prone it is unlikely to happen.
I'll finish with another couple of positives. I thought Carl Jenkinson had a very fine second-half and, going forward, he can be a real handful. I got the impression that Mertesacker was communicating with him today, as Vermaelen does, as any shaky moments he had were nothing to do with bad positioning. I was very pleased for the boy. Another player to be praised is Andrey Arshavin, who looked more interested today than he has since the Barcelona home game last season. The Russian was running at people, and directing his colleagues, just as you would want him to do.
All in all it wasn't vintage stuff, by any stretch of the imagination, but it was another big three points. We have moved back in to the top half of the table, and that can only be a good thing. The games now come thick and fast again, thank God, and the players have a tough night ahead on Wednesday in Marseilles. At least they can look forward to that game with a win under their belts.
Posted by DvbrisG at Sunday, October 16, 2011