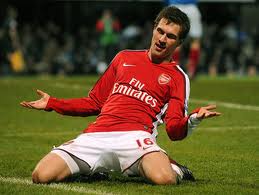 Rambo - focus will be predictably on the boyo tomorrow

I suppose it's rather apt that, on the day of the Rugby World Cup Final, Arsenal fans will have to suffer the visual spectacle of Stoke City tomorrow. Perhaps if England had Rory Delap throwing to their line-out they might have done a bit better in New Zealand. In all seriousness, you have to admire Stoke in that they have their way of playing and know how to do it well. Wimbledon were doing it twenty-five years ago, though for some reason the press see Pulis as some kind of tactical genius, whereas Dave Bassett and Bobby Gould were lambasted as the devil incarnate for the way their Dons teams played the game.
I suppose the big problem with the way Stoke play, from the point of view of an Arsenal supporter, is that we are more likely to be punished by them than almost any other team. From our first visit to the Britannia a few years back we have failed to deal with Stoke's aerial bombardment. That is a failing on Arsenal's part. Yes, defending against them is not simple, but it's a damn sight easier if you develop a plan to combat it in some way. Tomorrow will be the biggest test Per Mertesacker and Wojciech Szczesny ever have in the Premier League, and they are the two key men in the Arsenal penalty area as far as I'm concerned. If Szczesny can dominate his area, or Mertesacker goes to attack the ball properly (as he has in the past couple of weeks) we might yet be okay under the barrage.
The team news has been as expected, with Johan Djourou filling in at right-back for Carl Jenkinson. This is no bad thing tomorrow. Djourou brings extra height and, if he could just rediscover his form from this time last year, he could be very important tomorrow. When he puts his mind to it Djourou is strong, physical, and dominant in the air. Fingers crossed he plays like that against Stoke. Elsewhere the main man for Arsenal will be Aaron Ramsey. There is more than a little pressure on Rambo because of what happened to him at Stoke. There will be people watching simply to see how he copes psychologically with any 50/50 challenge - particularly if he goes up against that walking advert for a brain transplant who captain's Stoke City. Ramsey has not been anywhere near his best since the season started, but the goal the other night might just have been the kick in the a**e he needed. Also, getting past a game with Stoke could be just what is required. In the same way that Sol Campbell wasn't quite right until he went to play at White Hart Lane for the first time, I hope tomorrow is the moment that Aaron Ramsey leaves any demons behind.
It would be nice if the rest of the team could take a bit of the pressure off Robin Van Persie tomorrow. There is a growing feeling of reliance on the skipper. It hasn't yet got to the point we reached with Ian Wright in the mid-90s, but I can see us getting there soon. The likes of Arteta, Walcott, Gervinho, Rosicky and Arshavin have to step it up and get among the goals. There will come a time when RVP is going to be injured, or rested, so the sooner the others get their acts together the better.
Stoke, of course, will come loaded with their big men, and rightly so. They know how they can cause Arsenal problems, and would be foolish to try anything else. Peter Crouch is a joke of a player, but Arsenal centre-halves have made him look positively top-class at various times throughout his career. It annoys me to see the freak always doing well against us, because he really is awful. Sadly, I can see him scoring yet again against us tomorrow. It will be interesting to see who plays up front with Crouch. Walters seems a decent goalscorer, but the physical Cameron Jerome (who is in form) might well get the nod from Pulis. We will see.


I'll get a match review written either tomorrow evening, or on Monday.
Posted by DvbrisG at Saturday, October 22, 2011