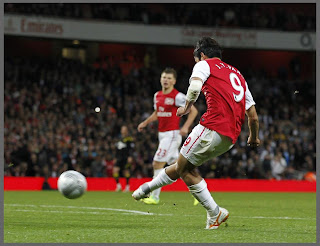 That ought to shift a few more Arsenal shirts


I think I must have watched a different game to most people last night. So far I've seen both full-backs criticised, Sebastien Squillaci, Arshavin and Emmanuel Frimpong. Strangely enough, I thought all of those mentioned did pretty damn well last night. Nico Yennaris, in particular, was outstanding at right-back. Frimpong, meanwhile, carried a midfield in which Coquelin was injured early in the game and struggled throughout. I notice that Arseblog (from whose Facebook site I have taken the picture above) describes how Frimpong was robbed of possession in the build-up to Bolton's goal - I can only assume that the television pictures failed to show that Coquelin's woeful pass failed to reach Frimpong before Muamba stole in to set up the play.
The return of Thomas Vermaelen (who was also very good) is grabbing the headlines today, and it's great to hear him say he is fit for the visit to Chelsea on Saturday. However, I would like to single out Squillaci for a bit of praise. I thought we had seen the last of him in an Arsenal shirt but, after a shaky first ten minutes, he turned in a really fine performance, especially in the air. Squillaci was strong and attacked the ball really well. I would suggest it's no coincidence that every time Vermaelen plays alongside another of our defenders that the other man looks so much better in their play. The Belgian brings a quality to the side that can not be overlooked (more on that below).
Alex Oxlade-Chamberlain had a poor game last night. It showed that the young man has plenty to learn, and he really struggled against the experienced Ricardo Gardner. The Ox had an early chance to score, having been put in by a super piece of play between Arshavin and Frimpong, but never really got a shot away. After that he never really got in to the game and it was no surprise to see him taken off. I would imagine that Alex will have learnt more from his struggles last night than he has in his previous two games. He will only improve from here on.
Like most people I was surprised by the presence of Andrey Arshavin last night. I fully expected Chamakh to be playing as he continues his desperate search for what he has lost these past nine months or so. I thought Arshavin played very well, and not just in the second-half as has been said elsewhere. It can be no coincidence that the Russian was finally given a game in a position that he wants to play, just behind the striker. For me it is yet more evidence of the need to change the Arsenal formation to a 4-4-2 or a 4-4-1-1. The whole team would benefit from a line-up like the one below:

With the squad players like Koscielny, Djourou, Frimpong, Coquelin, Benayoun, Ryo, Park and Chamakh we would have a very much stronger looking team available in my view. I would certainly feel much more confident in the abilities of the team if they played more to the collective strengths of the individuals.
What about the contribution of last night's match-winning goalscorer? Ju Young Park looked sharp last night. He is not afraid to shoot and won a few headers against the giants Cahill and Zat Knight. His finish for his goal was outstanding. The way he opened his body to curl it to the far corner brought back visions of Thierry Henry. The Korean made intelligent runs all night - at least one of the offside decisions against him in the first-half was incorrect. All in all he showed signs that he could be a decent squad performer for Arsenal. With the way Chamakh is failing to even look like getting a goal right now it would seem that Park could be a better option as the immediate back-up to Robin Van Persie (in the current formation, at least).
Bolton weren't without their chances, especially late on. Fabianski made a couple of excellent saves, and got away with at least one dodgy moment when the ball squirmed through his hands but went over the bar. The second-half of the game was a cracking affair, a really good cup-tie. Arsenal are in to the quarter-finals once again, and we are likely to be joined by Manchester City, Liverpool and Chelsea, as well as Manchester United. Obviously the path to any possible final is going to be more difficult than that we faced last season. For that reason I would like to see the Manager go for it now and try to get that elusive trophy as early as possible.

As you will see from the title of this post I am adding Steve Claridge to the list. The cretin list, that is. He must know a lot more about football than any of the rest of the population put together. The reason I say this is the utter garbage he began to spout on Radio 5 Live after the match last night. It is obvious to most observers that Thomas Vermaelen is top class. Arsenal always look stronger when he is in the side. Not according to gambler Steve, however. According to Claridge, whose latest return to playing indicates to me that his chosen horses have been trailing in last again, Vermaelen is "yet to convince" him of his quality. You could tell that Mark Pougatch, who was presenting the show, was quite taken aback by Claridge's statement, but the man with more clubs than a golfer was unrepentant.
Claridge wasn't finished, however. He went on to back Carlos Tevez in his row with Manchester City and Roberto Mancini. According to Claridge "There is no way Tevez refused to play for Manchester City." He had no factual foundation for such a statement. He went on to claim that Tevez "...probably refused to warm-up further as he was warm enough already." It really was a quite astounding thing to hear on the BBC. Mr Claridge, it seems, wants to be controversial. The sort of nonsense he comes out with belongs on TalkSport where he can get a reaction to such provocative sentiments. I'd imagine there were a few City fans listening last night in absolute astonishment.
I think I might actually produce a cretin list and put it somewhere on the site. If you want to recommend someone for it then please leave your suggestion in the comments section, on the Facebook page, or on Twitter (@ARSENALDvbrisG).

Tomorrow sees the first AGM of Arsenal Holdings PLC since Stan Kroenke took control of the Club. I imagine that stories will emerge from the meeting as the day goes on. Hopefully I'll find some time to pick up on some of it tomorrow evening.