Brief round-up from AGM - I wasn't there 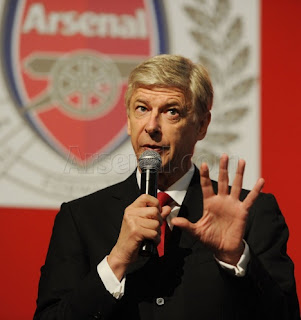 Le Boss in full flow during his AGM lecture


Today saw the annual AGM at Arsenal. As has been the case for years now we heard the phrase "self-sustaining business model." This should have come as no surprise and I suspect most fans will still welcome a sensible approach to the finances of the Club. However, what such a philosophy doesn't address is the fact that the money received from transfers has once again exceeded that spent. There was one quite ridiculous quote from Peter Hill-Wood (who was outrageously heckled during the meeting, and asked to step down in favour of David Dein - the same David Dein who voluntarily sold his shares in Arsenal to a Russian oligarch for millions of pounds, and whose son has overseen the transfers of many of our biggest players the past few years). This quote from Mr Hill-Wood has me confused:


“The provision of funds to invest in the team, which we did in the summer, we will do again,”

I don't understand how he can justify such a comment when Arsenal have made profits on players again. There was no "investment" in the squad over the Summer. In fact it was quite the opposite. Whoever is writing speeches for the Chairman is clearly doing him no favours at all. It is fair to say that Peter Hill-Wood is no longer a popular figure among vast numbers of fans due to his various public quotes of recent years, and this kind of stuff does nothing to improve that relationship. Having said that, I am furious at seeing an interview on Sky with Tim Payton, of the Arsenal Supporters Trust, talking about a return for Dein on the grounds that it's what the fans want. Mr Payton, and any "supporters group" does not speak on my behalf. It may well be that I am in a minority, but it annoys the hell out of me when these "super fans" get themselves on the box and start talking with an assumed authority on Arsenal and its supporters.

Ivan Gazidis revealed that the Club has paid off all debts except those held on the stadium. This was welcome news, as was that of new commercial deals which should boost the finances. There can be no doubt that the shirt deal with Nike and the sponsorship deals with Emirates were under-sold in the interests of generating quick money for the stadium move. Keith Edelman was, it seems to me, replaced by Gazidis as a result of such poor business on behalf of Arsenal. I find it annoying that we are still making virtually no money from the shirt deals at a time when other Premier League outfits are making millions and millions every year. I sincerely hope that any new deal involving the shirt manufacturers does not include a Nike Swoosh, such is the poor quality of what they produce.


Those present also heard from Stan Kroenke. The quotes I've read from the owner wouldn't be out of place in a speech made by a US Presidential candidate. "We are here for the long term...you better get used to seeing us." Blah, blah, blah. I have read a report that someone shouted "put your money where your mouth is then." My sentiments entirely. I don't want to hear about what a good "business" Arsenal is, especially from the billionaire owner. What I want to hear is how he's going to plough money in to the transfer budget in order for Arsenal to compete with the best.


Arsene Wenger also gave his annual address. Obviously he talked up the players now at the Club and called on the fans to back those players, and rightly so. However, he also told the meeting how "we have been more consistent than anybody else in the World for the last fifteen years." If Mr Hill Wood was talking nonsense with regards to investment then Wenger is just as guilty for this kind of comment. I would suggest that Manchester United have shown far more consistency than Arsenal over the past fifteen years, wouldn't you? Most telling of all was his comment that he "believes we can still qualify for the Champions League." Therein lies the heart of the problem - the aim of the Club is to qualify for the European Cup, not to win trophies. The Club officials speak of "competing for trophies" rather than the need for Arsenal to actually win, not just compete. I would have been far happier had Arsene said he believed we could still win trophies this season as it would have shown a genuine ambition to win, not just be there or thereabouts.


There is something I want to say about this season, and how it has gone recently, before I sign off for today. The start to the season was abysmal, both on and off the field. The nature of the defeat at Old Trafford should have been the final nail for the Manager. However, the results recently have been very good. The defeat at Tottenham, painful though it was, came in the middle of a run of victories. Yes, we haven't played a top side in any of those games, but credit is due to the players, and to the Manager for getting us back to within striking distance of the top four. The players involved seem to be showing a togetherness that hasn't been seen for some time. Players like Tomas Rosicky and Kieran Gibbs are showing glimpses of their best, while the likes of Laurent Koscielny have really stepped up in recent weeks. If somebody had told me after the Blackburn game that we would be where we are now I would have told them to get lost.
On Saturday the boys play Chelsea at Stamford Bridge. I fully expect them to lose the game. Anything other than a defeat will be a bonus. I hope that the players are not slated left, right and centre should they get beaten. Every team loses games, especially against better opposition. Arsenal, and particularly this Arsenal, are certainly no different. The road back to glory is going to be long for Arsenal supporters, and a defeat at Chelsea (assuming it's not a hammering) should not be held up as a symbol for those who would rather see the team lose in order to get the Manager out - those people are not really supporters of Arsenal Football Club. How could they be?
Posted by DvbrisG at Thursday, October 27, 2011