So much for challenging 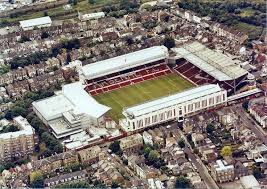 Not really worth leaving, was it?

It's been a long and depressing month for Arsenal since I last wrote anything. We've gone from having the chance to be within just a few points of Chelsea to being thirteen points behind them and out of contention to win the Premier League. A top four place looks as difficult to secure this season as it ever has with more teams actually contesting those positions. Then there is the debacle that was the away game at Bayern Munich. I read a tweet saying that George Graham learned more about European football in fifteen minutes against Benfica then  Arsene Wenger has learned in twenty-odd years. It's hard to argue with that. That second-half display, following a really very decent effort prior to half-time where we should have got our noses ahead, was so tactically inept that it was beyond belief. It was beyond unacceptable that we could still be so naive in any game, let alone against a top European side. To call it clueless wouldn't begin to cover it.
The nature of the hammerings at Chelsea and Bayern were totally predictable. Was anyone genuinely surprised? From the moment Marcos Alonso was allowed to assault Hector Bellerin and make it 1-0 you could see what was coming. There is no bottle, no organisation, no will to succeed. We lack quality, which is bizarre given how much money Wenger spent last year.
Rob Holding is excused any criticism as he is a youngster who is being used sparingly, but what was the point in signing Lucas Perez if Wenger doesn't actually want him? Lucas has been more than impressive in almost every game he has played, yet we are still being subjected to the same old rubbish despite the obvious lack of performances. I couldn't blame Lucas if he wanted out at Arsenal. And then we come to the two genuinely major signings made last summer - Granit Xhaka and Shkodran Mustafi cost us over £60m and both of these jokers are absolutely woeful. Xhaka is slow beyond belief and totally overwhelmed in the midfield. His lack of speed leads to him making fouls all over the place (though his "reputation" has allowed referees a free pass to issue cards to him compared to other players in this league) and he is totally out of his depth. For the money we paid for him it surely isn't asking too much for him to be able to dominate midfield against some utter rubbish in the Premier League. As for Mustafi I really don't know why more people haven't noticed this guy is an absolute donkey. In the last thirty years or so we've seen a lot of Arsenal centre-halves get stick from our own crowd. Gus Caesar, Andy Linighan, Martin Keown (yes he got some awful stick when he first came back to Arsenal), Pascal Cygan, Igors Stepanovs, Philippe Senderos, Johan Djourou and now Gabriel have all been boo-boys for the crowd. Not one of those was as bad at defending as Shkodran Mustafi is. He has got away with so many errors this season thanks to the pace of Koscielny and Bellerin, or the presence of Cech behind him. Mustafi is almost always the wrong side of pacy strikers when the ball is played down the side. At the same time he doesn't attack the ball properly in the air and is weak in the challenge. For some reason, however, he seems to think it's always the fault of someone else and can regularly be seen having a go at everyone - look at the (I think) third Bayern Munich goal and see him standing there as the goal is scored by the man he should be marking, and then he goes mad at his midfield!
Talking of midfield it is obvious that Santi Cazorla was vital to the way Arsenal play their football these days. We suffered badly when he got injured last season and I have to say it's even more apparent this year. Cazorla is the one player in the squad (in the absence of Jack Wilshere) who has the ability to break through the lines of an organised opponent and beat a man, creating space for those around him. He is also an intelligent enough footballer to be able to play the defensive, and sometimes cynical, part of the game in the centre of the pitch. Francis Coquelin certainly looks a far better player with Santi next to him and he doesn't go bombing up the pitch when Cazorla is there. Coquelin has actually been awful in recent matches and should probably be dropped if we had players to replace him, but I'm not having this revisionist attitude to him. Coquelin has been outstanding for Arsenal in the last couple of years and dismissing him on the grounds that N'Golo Kante is better is not fair on him. It isn't Coquelin's fault that Kante is better - he is probably now the best in the World in that position - so using that as a stick to beat our lad is childish and stupid.

To get back to my original reason for actually posting today, we were all sold a lie around fifteen years ago. Highbury was too small to reach the demand for tickets to see Arsenal. After eleven years now at the new stadium that is certainly true as just about every game is a sell-out, even if all seats aren't actually filled on a match-day. However, the main way Arsenal sold the stadium move to long-standing and loyal supporters was to tell us we had to move to a larger stadium to generate the revenue that would allow us to "compete" with the biggest European clubs. Even more recently Mr Gazidis told us we would be on the same level as Bayern Munich within a few years. A bit unfortunate, then, that Arsenal should get humiliated by said German giants a couple of weeks ago. We aren't competing with the biggest European clubs all these years after moving.
Forget Europe, we don't even compete in the Premier League. In 2008 we finished four points behind the Champions, and that was a season when everyone knows we should have won the Title. That is just about the only time we've got close since winning it in 2004. I don't consider a finish in the top four to be success. I consider winning a trophy to be success. I'd rather be in Manchester United's position this afternoon than Arsenal's as they've gone and won silverware at Wembley - albeit they needed the officials to make up their 13 man team yesterday. Arsenal have an excellent chance to win the FA Cup again this season and that would be very welcome indeed, but it doesn't mean we are doing what we left Highbury to ensure - we are not a team that is capable of winning the Premier League. That is unacceptable and you have to wonder now whether leaving Highbury was worth it at all. As far as I'm concerned it most certainly wasn't.
Posted by DvbrisG at Monday, February 27, 2017 3 comments: