TV5 signs on, Marseille (a) preview 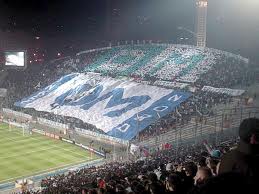 The Stade Velodrome in floodlit glory

Let's start today with the best news I've heard from Arsenal in ages. One of our top players, Thomas Vermaelen, has signed a new contract, and headed off any annoying headlines regarding him having to be off-loaded before we lose him for free. I've read some stuff on one or two of the forums whereby some supporters are criticising the Club for giving a contract to someone who is injured all the time. These people have drawn comparisons with Rosicky and Diaby, and I suppose that's not without its merits as a point of view to take. My view, however, is to wonder whether the same people would have been complaining even more loudly if we were forced to sell quality like Vermaelen in the event he hadn't put pen to paper. I am delighted that he is going to be at Arsenal for the long-haul, but we do need him fit and playing. His signing this contract should send out a message to some of the other star names in the squad, and it certainly makes a nonsense of Robin Van Persie trotting out the line that he doesn't have the time to discuss a new deal during the season.


On to the main business of the day and the boys are already in France ahead of their game against Marseille in the intimidating Stade Velodrome. I've just looked at the official website of Olympique Marseille and I'm surprised to see that tickets are still available, and from as little as €20. Perhaps that's a sign that the French team has had just as uninspiring a start to their season as Arsenal. Aside from their tremendous 3-0 win against Borussia Dortmund in their last European game L'OM have been very poor indeed. However, I expect them to raise their game once again for the visit of Arsene Wenger. It's fair to say that, following his time at Monaco (when he was literally robbed of Title's by Marseille's corruption) Le Boss is not all that popular at the Velodrome. I suspect that the feeling of dislike is strong on Arsene's side as well. He doesn't necessarily strike you as someone that would be bitter but he certainly has a right to be where Marseille are concerned.
Arsenal are without both first-choice full-backs, and this will be another huge test for Carl Jenkinson at the very top level. The centre-backs will also be up against it in a big way against Loic Remy. It will be interesting to see how Mertesacker and Koscielny handle the pace and physical presence of Remy. Aaron Ramsey is back in the squad after missing out on Saturday, while Marouane Chamakh also returns. Arsenal have taken the bare 18 players, as usual. This is something that always has me scratching my head as, if someone goes down with sickness of some kind, we are short of a full match-day unit.
I can't really see there being too much being changed from Saturday. I wouldn't be surprised to see Arshavin getting the nod over either Walcott or Gervinho, while I can see Rosicky keeping his place and Arteta missing out to Ramsey. Apart from the that the only other change should be Santos for the injured Kieran Gibbs.
If I was offered a draw for tomorrow I would take it. It's important to be right at it from the kick-off and making tackles all over the pitch. The noise of the crowd will be deafening so an early silencer wouldn't go amiss at all. It will be a tough game, and our reliance on Robin Van Persie will be bigger than ever. If we could nick a win it really would be a confidence booster.


I'll get around to reviewing the match on Thursday evening.
Posted by DvbrisG at Tuesday, October 18, 2011