And everyone turned up for once... 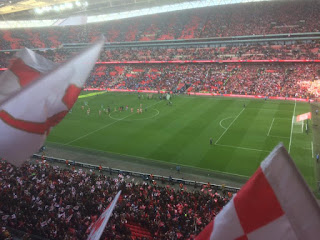 After the final whistle 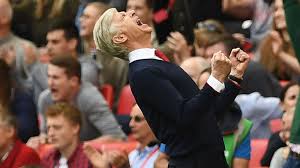 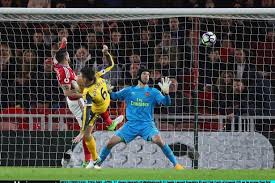 Arsene Wenger sprung a small surprise last night with a move to three centre-backs. We haven't seen him use this since the last day of the 1996-97 season when Arsenal brought down the final curtain on the Baseball Ground with Anelka and Bergkamp to the fore after Tony Adams was sent-off early on. Halcyon days ahead of Wenger beginning his Revolution of Arsenal and English football in the three months that followed.
It would be fair to say that, beyond the excellent display from Rob Holding, the move wasn't a total success at Middlesbrough. We lined up with the three central defenders but, more often than not, once we started the interminable sideways passing Gabriel was suddenly charging up the field to join the attack, the consequence of which was leaving just two at the back as per usual. Yes, we changed the formation on paper, but the method in reality was painfully familiar. It's all very well making the change, but the biggest change actually has to come from being organised properly. Chelsea don't have particularly good centre-backs - Luiz and Cahill are woeful defenders if we're being honest - but they have an organised team. At least one of Matic or Kante is always where they're supposed to be, guarding their defenders from in front. Luiz no longer takes off on mad dashes up front in the way that Gabriel was being asked to last night. We had Xhaka, who is immobile and slow, and Ramsey who I really don't know what it is he is supposed to bring to the side. Coquelin can very much play the role that Matic does at Chelsea, but he too seems to think that he's some kind of latter-day Beckenbauer type as soon as Cazorla is missing. We also don't examine our opponents in any way. The Middlesbrough goal is a perfect case in point here. Remember how Robben opened the scoring in Munich by being allowed to cut in on his left foot? Last night Monreal actually showed Downing inside and on to his left foot from where he curled the cross over a stranded, and woefully out of position, Koscielny. This is not rocket science, but it keeps happening to Arsenal over and over again. It's easy to fix it with a bit of hard work on the training ground on something other than passing the bloody football all day long!
Going forward we lacked much in the way of creativity. Oxlade-Chamberlain was the standout player in the way he drove at the Boro defence, constantly beating his defender, but his final ball sadly epitomises his career to date. The Ox is an amazing talent; quick, strong, skillful, has a powerful shot etc. But far too often he picks the wrong option, or his pass is just not accurate enough, or his shot at goal is wayward. He is an exciting player, he can play in a few positions and impress with his ability, but something is not quite there just yet. I want Ox to stay at Arsenal, and I believe he owes it to the club for all the times they've stuck by him through injury lay-offs. When fit he has almost always been involved and he should be looking to stay loyal in my view. His interview after the game was excellent, by the way. As for the rest of the attacking players I think the new formation was a little confusing at times, and the effort from some was lacking. Giroud had the better of their defenders all night but he lacked service in the first-half and application in the second - he was totally anonymous after half-time. Ozil flitted in and out but was better in the second-half, though I counted six occasions in the first where he bottled out of challenges and that is not acceptable. I've already mentioned Ramsey. So what about Alexis?
We saw a stunning goal from Alexis Sanchez from a superb free-kick. Yes, the goalkeeper was badly positioned but you still have to execute the dead-ball strike effectively and he did that in great style. At a time when we are playing so badly it was lovely to see a great goal from an Arsenal player. He also had a big hand in the second goal with his chip in to the box allowing Ramsey the space to not mess things up and lay the ball off to Ozil for a very tidy finish. There is a fair argument to say that is the only contribution that matters, and Dennis Bergkamp had many a poor game only to be remembered for actually setting up the winning goal. However, Alexis was awful in every other moment of the match last night. I have never seen him give the ball away so much. On three or four occasions, including their equaliser, it was his carelessness that allowed Middlesbrough to go forward and put our defence under pressure. The bit where he gestured to everyone to "calm down" and then played it five yards square to the nearest opponent would have been comical if it hadn't been an Arsenal player. For all his greatness, and Alexis is a really great player, last night I thought his general play was woeful. It's possible to appreciate his superb goal while still criticising a bad performance.
Three points mattered last night in terms of keeping alive the possibility of illusory "success" by finishing in the Champions League positions. It also mattered that the players got a win ahead of going to Wembley on Sunday. I hope we intend to persevere with the change in formation and, hopefully, work properly on it this week. I also hope the players are actually up for it ahead of playing Manchester City. Make no mistake, if the performance is on the level it was last night then Arsenal will get thrashed on Sunday.
Posted by DvbrisG at Tuesday, April 18, 2017 3 comments:

What is this Arsenal we all want back? 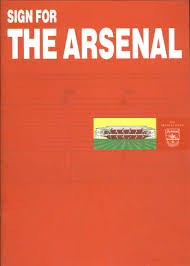 Arsenal and money is not a new thing