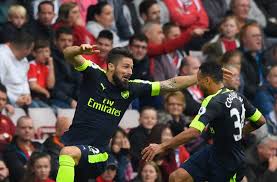 Arsene Wenger - a celebration from a Wenger Out person

Arsene with the Double