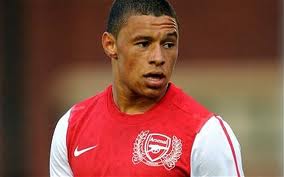 It wasn't especially comfortable last night, but Arsenal got the win. That will do me nicely. After Marouane Chamakh missed a glorious chance to put us 3-0 in front the boys stopped playing until half-time, but the defensive display in the second-half was good enough to see us to victory. That, in a nutshell, is the story of the game but it doesn't do justice to the performance of an 18 year-old making a massive step up in quality.
This was the first time I've been able to get a proper look at Alex Oxlade-Chamberlain (and even now it was only on telly, thanks to work). I was mightily impressed by the young man. The first thing that strikes you about Chamberlain is his robust frame. Whereas an 18 year-old Theo looked like a little boy (and often still does) this lad looks strong and big. He has a massive neck, and runs with power as well as pace. It seems that he is not easily brushed aside in the tackle, and he crosses with a quality conspicuous by its absence in the Arsenal squad in recent years. Last night's Greek opponents had little answer to him and his marker should have been leaving the field for his second-booking long before the end of the game. The young man took his goal exceptionally well, too, indicating that he is able to use both feet to decent effect. Given what has happened to Jack Wilshere there is a necessity to protect Chamberlain from too much football but, having said that, he must not be under-used. To put in such a good performance having stepped out of the third division in May speaks volumes about his ability. Securing his signing may yet provide a lasting Arsene Wenger legacy at Arsenal. I didn't think he should have been taken off last night, as we lost our pacy outlet, but if it means he is fit to start at Tottenham on Sunday it will be worthwhile.
The same can not be said, of course, of many of Chamberlain's colleagues last night. I thought Chamakh did okay, but I have never seen a centre-forward look quite so uncomfortable when faced with a chance to score when one-on-one. Again, I didn't think he should have been taken off last night, as once he was gone the ball just kept coming back in to our half. Then there is Andrey Arshavin. When was the last time he had a good game? I would have no hesitation in leaving him out on Sunday if Gervinho is fit. Tomas Rosicky, meanwhile, simply lacks the necessary pace to have any impact on a game. One goal in two years is not the mark of a quality attacking midfield player. Arteta was largely anonymous in attacking areas, though the fact that he is being made to play a deeper role in a number of games is doing him no favours - Arteta is a creator, and should be deployed much further forward in order to affect the play for Arsenal.
I have to say that the back four played a fine second-half. In the first forty-five minutes we were getting carved apart, particularly down Sagna's side. After half-time there was much more solidity, with Frimpong doing well to protect them. Alex Song won a number of balls in the area, though the referee was particularly generous with the sort of nudges in the back for which Song is regularly penalised in the Premier League. Per Mertesacker was quietly impressive. I have a theory on the big man that he is the sort of player who will never stand out when having a decent game. There is nothing flashy about him, he reads the play and gets himself in good positions. The problem for him will be when he does make an error, as the press will start on about his lack of pace. In short, he will rarely be praised, but people won't hesitate to pick him up if something goes wrong. I think he is settling in nicely, and the return of Vermaelen alongside him can not come soon enough for me.
All in all it wasn't an overly satisfactory performance, but it was an important three points. None of us will be complaining if a similar result is gained from a similar performance at Tottenham on Sunday. I'll preview the derby on Saturday, and that piece will include some observations on Aaron Ramsey - I have not been impressed by the boyo this season, and I'll explain why in my next post.
Posted by DvbrisG at Thursday, September 29, 2011