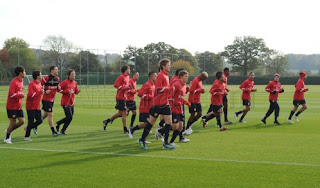 Most of tomorrow's 18 man squad in training


I really enjoyed it yesterday. I thought it was a decent fighting performance from the boys. Stoke were their usual physical selves, but Arsenal stood up to it very well. The defending for the Stoke goal was awful as Shawcross was allowed to wander in to the area with nobody near him. However, the most scandalous aspect of the goal was the award of the free-kick which led to it in the first place. The whole ground cheered a tremendous defensive header by Koscielny, only for the referee to award a free-kick against him. It was a truly disgusting piece of refereeing (on watching the goal back on TV I noticed that Walters made the same challenge to beat Koscielny as he nodded the ball down for Crouch's tap-in, but no foul was given that time). Referee Lee Mason is developing a bit of a reputation for decisions against Arsenal - remember the Everton game in January? Less than a minute after Stoke's equaliser he failed to give a penalty for a clear foul by Wilkinson on Chamakh. Nobody can be that incompetent, can they?
Of course the game changed when Robin Van Persie came on as we suddenly had a genuine goalscoring threat. I am not going to criticise Marouane Chamakh as I thought he did just fine yesterday, and worked his socks off up front. It is simply the case that Van Persie is more likely to put the ball in the net, and Stoke knew it. With Walcott finally replaced, and not before time, Gervinho got down the right-hand side and showed what he offers the team. His two assists yesterday were very similar to that he provided to RVP at Udinese, and followed a well taken goal of his own. Gervinho certainly played his best game in an Arsenal shirt yesterday, and his pace is a genuine threat. Walcott could learn a lot from how Gervinho beat his men for the two Van Persie goals as there was no skill involved, just lots of speed across the ground. Theo has more speed than anyone else - I just wish he could learn to use it properly.
I want to single out Aaron Ramsey for praise. I thought he played his best game of the season against Stoke, and looked so much more positive on the ball than he has recently. The pass over the top for Gervinho's goal was top class. Given what he's been through it is pleasing to Gooners everywhere when Rambo can produce a performance like that. We all saw how good he was becoming when Shawcross maimed him so, hopefully, yesterday was the first sign of a return to that form.
All in all you have to say that the players have done quite well recently in terms of digging out results. The performances haven't, perhaps, included the flowing football that Wenger team's are known for, but who cares as long as the wins keep coming? There is a massive test ahead again on Saturday, but credit must be given where it is due. I would rather win ugly, like the last three games, than lose pretty like at Old Trafford or Blackburn. The players are applying themselves to the task at hand and seem to be playing far more as a proper team. I wasn't too keen on the flash passing towards the end yesterday, and any fan that shouts "ole" when the players are knocking it about really does deserve to be shot in the head. Nevertheless, the passing kept Stoke out of the game, and Arsenal got another well-deserved three points.


I had to watch Match Of The Day 2 last night so that I could see the Man Utd game. It amazes me how the pundits have started to criticise the United defence after yesterday. Suddenly there is this new stat of how many chances they have conceded. Anyone watching their matches this season could have told you that their defence has been awful, and only poor finishing has prevented them form conceding many more goals. Let's not forget that these same pundits were telling us how good people like Chris Smalling were just a couple of weeks ago - they talked him in to the England team for God's sake. They also have suddenly turned on Rio Ferdinand after yesterday. Again, he's looked finished for more than a year.
While on the subject of pundits, it didn't go unnoticed by me that they have also turned on David Luiz of Chelsea. This is the same David Luiz who was lauded as a masterstroke of a signing in January. The same David Luiz who was "one of the best centre-backs in Europe" back in March. After yesterday he is someone who "would make a good defensive midfield player, but should never play at centre-back" (that's from Jamie Redknapp, by the way).
I hate these pundits, especially Redknapp. They talk such obvious nonsense, despite having played at the highest level. The only one who appears to speak with any insight whatsoever is Gary Neville. I despised Neville as a player, but he is a real find for Sky and knocks spots off all the other idiots on telly these days.


Judging by the pictures from training today (one of which is at the top of this post) it will be a very much weakened team taking the field against Bolton tomorrow evening, as expected. However, it will be a young team bolstered by Thomas Vermaelen. He seems to have been very much involved in the training today with the players who will be on the pitch tomorrow. Sebastien Squillaci is also in line to play. Among the youngsters included in the training today were Chuks Aneke, Nico Yennaris, Sead Hajrovic, Luke Freeman, Oghuzan Ozyakup and Sanchez Watt. All six would be most likely to be among the substitutes, I would think (though one or two of them might not make the cut).
We have a dearth of full-backs right now so it wouldn't surprise me to see Vermaelen play at left-back if he starts the game. This would leave Squillaci and Ignasi Miquel in the centre of defence and, perhaps, Francis Coquelin at right-back. Emmanuel Frimpong will anchor the midfield alongside Tomas Rosicky, with Yossi Benayoun and Alex Oxlade-Chamberlain most likely to play out wide. Arsene Wenger has already confirmed that Ju Young Park will start up front and I expect him to be partnered by Marouane Chamakh. I could, of course, have got all of that completely wrong! Surely there will be a place for Ryo among the substitutes? We'll see tomorrow, I suppose.
Bolton are also going to be much changed so it will be a very interesting game. I enjoy the Carling Cup nights, though I would far rather the Manager was approaching it as he did last season. Arsenal need a trophy, and playing such a weakened side doesn't exactly maximise our chances of getting our hands on the easiest one of all. Hopefully, if we can win tomorrow, and get within a couple of games of Wembley, Arsene will start to take it more seriously.


I'll write a review of the game on Wednesday evening.