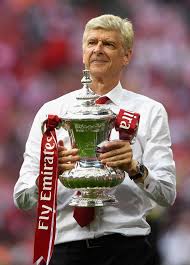 I'm still on a high from Saturday. Arsene Wenger being given a new contract is not enough to sour my mood so soon after one of the greatest wins in Arsenal history. As much I as didn't want him to get a new contract at Arsenal I am amazed at how many seem to actually let it have such a huge impact on their lives. I get angry about it when we lose, more so when we get a hammering like we've suffered far too much since the stadium move. I shout "Wenger Out" via this site. But it doesn't rule my life. My family is what rules my life, not my football club. After my family the thing I actually care about most is Arsenal, and I work only to pay for my family and to go to Arsenal and play/watch cricket. My job is important in that it's what provides the money but I could gladly do any other job that allowed me to pay for the things I genuinely live for. Arsenal giving Wenger a new contract is annoying to say the least and, but for the emotions still being strong from Wembley, I would probably have been apoplectic yesterday. However, by now I would have got over it and be looking forward. I'd actually be looking forward to forgetting about Arsenal for a couple of weeks until the fixtures come out.
I said on Twitter and Facebook on Tuesday that it's clearly the wrong decision as far as I'm concerned, and that the protests achieved exactly what I had said they would - sod-all. I also made the point that I would be going to support the team as usual next season because that's what being a supporter is supposed to be about. I've seen people like me, maybe even me personally, described as a "c**t" for airing that view. We are, apparently, the reason for the problems at Arsenal as we will keep paying our money to the club. My Dad has been going to watch Arsenal since the early 1950's, but apparently he's the problem at Arsenal for supporting the team. Okay.
The thing I don't get with the more extreme elements of the Wenger Out "movement" is that they rightly criticise those who adore him for seeing Arsene as bigger than Arsenal. The phrase "Arsenal FC not Arsene FC" is an oft-seen mantra, and rightly so. However, what I am seeing now is those very same people falling in to the trap of seeing Wenger as bigger than Arsenal. If you decide to deliberately stop going and turn your back on Arsenal because of Arsene Wenger then you are absolutely 100% making him bigger than the club. I just don't get why you'd cut off your nose to spite your face that way. It simply defies logic.
I'll be renewing my season ticket after I've written this post and I will look forward to hopefully seeing some new signings over the summer, enjoy a decent pre-season, go to the Emirates Cup with the wife and kids, and then support the team (not the regime) once August comes around. I hope we play well and go for the Title, I hope we get to Wembley and win another cup, I hope we win the UEFA Cup having taken the tournament seriously enough to do so. Do I think it's likely we will win the Premier League? No. Do I think we have every chance of qualifying for the Champions League at the end of next season? Yes. Do I think we can win a trophy? Yes, of course - everyone wrote us off this season and look what happened on Saturday at Wembley.
There is an uncomfortable truth about Wenger that hits people like me straight between the eyes. I want him out because I think he is incapable of putting a team together across a whole season and winning the Premier League. However, Arsenal have won three trophies in four seasons. The FA Cup isn't some minor pre-season friendly effort, it is the real deal. We exist for days like last Saturday. Wenger, for all that is clearly wrong, need only point to the silverware. We can be as rabid in our disappointment (sheer hatred in some cases) but it matters not a jot. If you want to protest then do it against Kroenke but, I'll tell you this - if Arsenal surprise us next season and do well I can guarantee there will be no protests at all, just as there weren't at Manchester United in recent years.