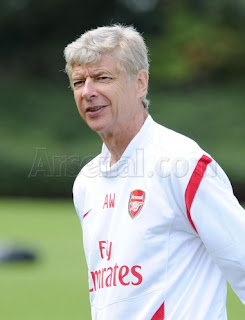 Arsene Wenger at training today
So the players returned to training yesterday, including Cesc Fabregas. Interestingly, however, there have been no pictures on the official website so far of Cesc joining his mates out on the training pitch. The most notable things so far have been that Carl Jenkinson has been handed the number 25 shirt, thus confirming his place as a member of the first-team, and that Ryo Miyaichi seems to have not been granted a number - he is wearing a training top with number 93 on it. The thing that will concern most Arsenal fans is the plethora of photographs containing those we could probably end up doing without - Eboue was in at least three of them yesterday, while Squillaci and Bendtner are prevalent today.
It seems that still there is very little happening with regards to any strengthening. Gervinho has apparently had his medical today so we can probably expect the official announcement of his much expected arrival in the very near future. Apart from that, nothing. Owen Coyle has rightly called for Arsenal to do business with Bolton for Gary Cahill, or put the whole thing to bed once and for all. It concerns me that there seems to be a pattern developing whereby Arsenal are linked to players in which they clearly have more than a passing interest, and yet no bids are made. Two weeks ago there had been no bid for Gervinho. Last week Southampton made it clear that there had been no bid for Alex Oxlade-Chamberlain. Now Owen Coyle tells us that Cahill has not been the subject of any bid. At risk of being criticised (again) for panicking about the lack of arrivals, it should be made clear that pre-season has begun. The Arsenal players are preparing for the new season. They fly to the far-east this weekend. Would it not be much better to have the new players in situ early doors so that preparation can be done properly? Back in 2001 we had Jeffers, Campbell, Van Bronckhorst and Wright signed and ready for the return to training. Similarly in 1997 with Petit, Overmars, Upson, Boa Morte, Manninger, Wreh and Grimandi. I am not alone in being worried, nor am I going to be placated on the grounds that the first League game is some time away.
I am extremely concerned about the reasons why we are not doing the business early. While Arsenal prevaricates we see Manchester United, Liverpool and Manchester City getting on with things. Chelsea will very soon do likewise and will blow us out of the water for any player both clubs might be interested in. I believe that our failure to qualify for the Champions League is the main reason - Arsenal are not spending money yet because they don't yet know what their budget is for next season - if they don't get through the qualifier then money becomes very tight. If we are still waiting in the third week of August then we really will be in trouble.
Posted by DvbrisG at Wednesday, July 06, 2011