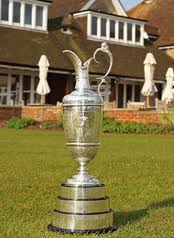 Real value for your fifty quid
Apologies for the lack of a match review from Wednesday's match. I'm sure you all know that the boys won 4-0 and had an unusually competitive workout for their first outing of the season. I saw the full re-run of the game on ESPN on Wednesday and with an early start ahead of me yesterday I didn't get around to writing anything.
I spent yesterday at The Open at Royal St George's (it was notable how many football writers could be seen on the links following Rory McIlroy - no doubt they have all written expert pieces to rival their football knowledge in today's papers - they're also the largest collection of fat b******s you'll ever see). I arrived at the course at 6.35am yesterday and left at around 7.45pm. I paid £55 for the privilege (and it most certainly is a privilege) plus £5 for the very well organised park and ride facility. Compare that with going to watch Arsenal, where the ticket costs £50 and the parking a further £15. For the £55 I spent yesterday I saw all of the top golfers in the World (with the exception of Tiger Woods and Vijay Singh). With Arsene Wenger continuing to prevaricate in the transfer window I am worried about what I am going to get for my similar outlay on going to watch any given match in North London this season. Seeing Denilson and Squillaci getting in various mix-ups between themselves on Wednesday means I am unlikely to be watching too many of the World's best footballers any time soon. I am very aware of the fact that I seem to be criticising Wenger every time I write something recently, so I will merely point you to his latest comments regarding the defence - you can read them here. If you're truly an Arsenal supporter and these statements do not concern you then there is something seriously warped in your thinking.


The second pre-season friendly gets underway at 12.30BST tomorrow and is again live on Arsenal Player. There is a full re-run on ESPN again tomorrow evening. Having played more than half of the match the other day I think Carl Jenkinson, Ryo Miyaichi and Aaron Ramsey will get slightly less playing time tomorrow. Samir Nasri, Robin Van Persie and Bacary Sagna may well step up their preparations given they played only twenty minutes or so in Malaysia. I expect it to be a similar test for the players as they had a couple of days ago.
I've been very interested in the opportunities afforded to the "fans" in the far-east. Even on the much over-hyped members days at the new stadium members of "The Arsenal" don't generally get too close to the players. When was the last time you ever remember the chance to get autographs and photos with the entire squad? On the pre-season tours of the past ten years, in Austria, the supporters who attended were kept behind fences so that the players didn't have to sign for those in attendance unless they were feeling benevolent (in fairness to the players they almost always obliged). It's amazing what a bit of PR and the chance to sell a few shirts can do. There are actually a good number of travelling Gooners out there following the tour, as they do with every other game Arsenal play, but they weren't invited to these sessions - after all, they only pay thousands of pounds every year to follow the team. In fairness to Arsene Wenger I am fairly certain he can't wait to get back here and prepare in less of a circus.


I will write a match review tomorrow night. I promise.
Posted by DvbrisG at Friday, July 15, 2011