Nothing to see here - move along Pep 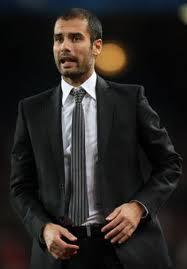 Guardiola - purveyor of bull****
I was just about to leave for work yesterday when Sky Sports News suddenly revealed "breaking news" on the Cesc Fabregas situation. It seemed from the report that Arsenal had finally given in and were about to sell Fabregas to Barcelona. Guardiola had claimed that Arsenal have "agreed to negotiate" over a deal for the skipper. Naturally, I went off to work believing that things were coming to a head, and I couldn't reconcile the ideal of selling Fabregas, with four years left on his contract, but keeping Nasri, with one year left.
When I got home from work late last night I decided to look closely at what had been said by Guardiola. It became obvious that he had planted a carefully chosen form of words in his press conference, but if you choose to actually look a bit deeper then nothing has changed. The facts remain that Barcelona have yet to offer anything close to what Arsenal are looking for. All the time that remains the same Fabregas will remain at Arsenal. This was nothing more than posturing from Barcelona in order to further unsettle Cesc Fabregas. Ultimately, if they really want him, Barcelona will come up with the necessary money to force Arsenal's hand and sell. All the time they fail to do so you have to wonder if they genuinely want the boy to play for them this season. If he does go there it is unlikely he will get much further than the bench for most of the season, and certainly not for any big games unless Xavi or Iniesta are injured/suspended.
So, you see, nothing has changed. Fabregas remains an Arsenal player and will be so until Barca offer enough. Nothing new, nothing more to say. Guardiola was merely continuing with Barcelona's very public agenda for pursuing a player from another Club.
Like everyone else I am sick of the whole saga, but there is nothing Arsenal can do about Barcelona's behaviour (though UEFA could), or the press speculation, so there is no point in getting upset about it. I remain neutral on the whole subject, but I would far rather we kept Fabregas and booted out Nasri - we hold the whip-hand on Fabregas due to his contract. With Nasri we are in a serious position of weakness as we will lose a valuable asset for nothing this time next year. Given Arsene Wenger's liking for good economics and value for money this seems a complete no-brainer to me.