Saturday's fishing success, Gael out - so who do we want to replace him? 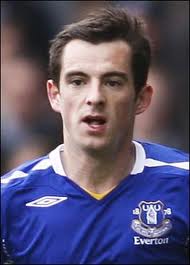 Leighton Baines - he gets my vote
I really enjoyed the fallout from Saturday's post. If truth be known I was a bit bored and wanted to see how easy it would be to bait a few Tottenham fans in to a response. I was still rather surprised to see just how quickly and how willingly they responded to it. Of course they all reacted in the expected way as they continue to delude themselves that Tottenham Hotspur is going places. They honestly seem to think that we are the ones that have lived in an artificial dream world this past twenty-odd years. It's been a fun time since George Graham took over with regards to our relationship with the mugs - barring the FA Cup tie in 1991 it's been pretty much one-way traffic. Modern day Spurs' fans hatred of us is based on jealousy of Arsenal's success since the mid 1980s. Our current predicament, however, worries me greatly. Last season we were more than vaguely reminiscent of the club we love to ridicule. There are a number of parallels, from the fallacy that Arsenal continue to play great football (we don't), to the ability to win the odd big game while choking against the mediocre, and even the penchant for throwing away a lead against our North London neighbours. We are perilously close to becoming the new Tottenham Hotspur, and that frightens me.


Arsenal have confirmed that Gael Clichy has completed his move to Manchester City as expected. I wish Clichy the best of luck - he never wronged us in any way, and he is the final Invincible to leave us. Now though he must be replaced. There is a strong chance that Kieran Gibbs will be given the nod, with Armand Traore acting as back-up. This fills me with dread. Gibbs has gone backwards this past year and is nowhere near ready, or capable, to play a full season at the highest level (his fitness issues will preclude him from doing so anyway if things go to form). With Wenger's continuing frugality in the transfer market I can see this happening.
There are options for Wenger should he choose to pay out some proper money. Over the past few months we have been linked with three left-backs of some repute - Jose Enrique (Newcastle United), Emilio Izaguirre (Celtic) and Leighton Baines (Everton). For me Baines is the standout performed of the three. Enrique was probably the only Newcastle defender to impress at all in the Premier League last season, but I really don't think he is top class by any stretch. I saw a lot of Izaguirre towards the back end of last season. He is quick and skillful, but his defensive work is often not up to scratch - and having played in Scotland he hasn't been tested properly.
Which brings us back to Baines. The Everton full-back was excellent last season, and has improved year on year. He is a little unfortunate, perhaps, to be kept out of the England side by the best player in the World in his position. Baines is very good going forward, an excellent crosser of the ball, and superb on set-pieces. Most importantly, of course, he is a fine defender. I would be very pleased if Wenger stumped up the necessary wedge to bring Baines to Arsenal this Summer - a swap, plus money, with Traore could be just the ticket.
Posted by DvbrisG at Monday, July 04, 2011