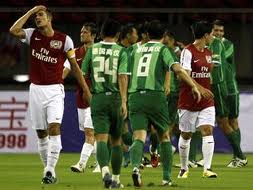 Does RVP's expression reflect that of all Arsenal fans after opening goal?

I have to say that it's all maddeningly predictable. The first half of the match today was reminiscent of almost every game Arsenal played after Christmas last season. It seems that the method for stopping Arsenal scoring, while exploiting their defensive softness, has spread all the way to China. Given that the Premier League is shown in its entirety every weekend we probably shouldn't be surprised. Hangzhou simply strung plenty of players across their defensive line, remained organised, and invited Arsenal to pass the ball square and backwards whenever they got within thirty yards of goal. The same old formation, being put in to practise by the same old players, produced the same boring style of play whereby there was no penetration, and never looked like being, as the ball went back and forth in front of the opposition defenders - plenty of possession, but none of it in any way a threat to the goalkeeper. Meanwhile Djourou and Squillaci continued their keystone cops efforts in defence, ably assisted by Vito Mannone as we conceded from a set-piece. As for the way the two centre-backs fared in open play the less said the better. Suffice to say that Hangzhou were well worth their lead until Vela's equaliser on half-time.
The second half was much more pleasing from an Arsenal point of view, with plenty of chances being created. Sadly they all fell to the normally reliable Theo Walcott. Rather like Lloyd Bridges' character in "Airplane: The Movie" Theo picked the wrong day to start talking about playing centre-forward. The one thing to be said is that at least there was some shooting after half-time, even if it failed to beat the goalkeeper at any time. I just think we would be looking so much better with two up front.
Carlos Vela is someone I believe is not good enough to play for Arsenal. However, he has got absolutely no chance of proving otherwise all the time we persist with this system. Today he had to play wide on the right. If there is anything that Vela is good at then it's finishing. He has neither the skill, nor the pace, to play out wide for Arsenal. It's no coincidence that he got his goal after drifting in to the centre and putting away a rebound from the goalkeeper - a poacher's goal. Perhaps the reason Hernandez scored so many for United last season is that he got to play up front, with a provider of good chances. Much like Walcott (forget his bad day today) Vela needs to play in the middle with Van Persie or Chamakh. Such a change would also make it more difficult to defend against our currently predictable style of play.
Just a quick aside to finish on - apparently Thomas Rosicky played the first-half - I didn't see him touch the ball.
Posted by DvbrisG at Saturday, July 16, 2011