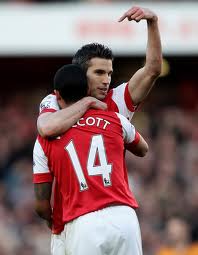 Robin and Theo - sending a message?
Now that the players are back and, even better, on a publicity first tour there is plenty of stuff reaching us by way of the various interviews they are giving. Robin Van Persie and Theo Walcott have both been having their say on what they would like to see with regards to the squad and the improvements required. It's no coincidence that two of the more intelligent players at Arsenal have been able to put their case so eloquently without criticising anyone at the Club.
RVP has given his view that he would like to see major signings made by the Club in order to keep pace with both Manchester sides, Chelsea and Liverpool. Robin rightly states that Liverpool and United have very much showed their ambition by adding players to their squad. Most refreshing of all was hearing him say that competition for places is important to keep a player on his toes - including himself. That is just the sort of thing you want to hear from one of your very few world-class players. If you take the example of Alex Song, and his form since November, you can see the merits in what Van Persie is saying - in Song's case his only "rival" in the squad was Denilson - is it any wonder he got in to the comfort zone? Surprisingly the press have not turned Robin's quotes in to a "Van Persie threatens Arsenal" or "Van Persie questions Wenger ambition" piece. I don't like the idea of a centre-forward as Captain, but RVP certainly is able to speak in the way you would want from your leader on the pitch.
Van Persie's comments were echoed this morning in an interview given by Theo Walcott in Kuala Lumpur. Once again Theo cited the need for quality additions to the squad. He noted the requirement to learn from what went wrong last season, and it is clear that the players feel an injection of new blood would be very welcome indeed. It's a big season ahead for Walcott on a personal level. I feel he would benefit greatly from a move in to the centre, as part of a two man attack. Is Wenger willing to realise the benefits this might bring to the side? Time will tell. Whatever the case, it is again refreshing to hear a young man, playing for his future, advocate the need for more quality - even if it may be a threat to his place.
Something that seems to have been largely overlooked from Van Persie's interview is his praise of Cesc Fabregas. RVP has left nobody in any doubt of the importance, as he sees it, of Fabregas to Arsenal's success. It would seem that Fabregas is to Van Persie what Pires was to Henry and Bergkamp was to Ljungberg. More notable to me is the fact that he didn't speak at all about Samir Nasri. It may well be, of course, that he was asked specifically about Fabregas' situation, and not about Nasri. However, it would be no surprise to me to find that he failed to mention Nasri as he is not overly popular at Arsenal. Quite apart from what has gone on since the end of the season it is clear from his past that Samir is not the easiest person to get along with. He has a record of upsetting more senior colleagues - just ask Thierry Henry and William Gallas. It might just be that the other top players would not be too bothered to see the back of Nasri, while being determined that the skipper should stay.


Tomorrow marks the start of the season in terms of playing matches. The boys are up against a Malaysia Select XI in the first pre-season game. There are 23 players on tour and I think at least 22 of them will get a run out tomorrow, fitness permitting (they will probably all get some time on the pitch). I think it's unlikely that any of them would play more than 45 minutes each, particularly at this stage of their preparations amidst such humidity.
The game is live on Arsenal Player, but I will have to catch it on a replay as work prevents me from watching the game live tomorrow lunchtime. If and when I've seen it I'll post a match review, but it will be brief as I need an early night tomorrow - I intend to be present when the Open gets under way at 6.30am on Thursday (have a sneaky suspicion that Sergio might take some beating this week, though Kaymer was looking more than sharp in practise yesterday). I digress! More tomorrow, hopefully with the first win of the season under out belts, and no injuries.
Posted by DvbrisG at Tuesday, July 12, 2011