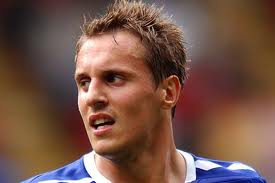 Phil Jagielka - only if he brings a friend
Sky and BBC are both backing up newspaper reports this morning that Arsenal have had a bid refused by Everton for Phil Jagielka. Arsene Wenger has been very firm in saying that he will only buy players that will augment the current squad. I would say that 100% of people connected with Arsenal (and even not connected with Arsenal) accept we need defensive additions (the "s" is important there). However, as Arsene says, they must be the "right type of player." That being the case I have to question why the hell we are in for Phil Jagielka. Don't get me wrong, I think Jagielka is a very decent Premier League footballer. Two years ago, before his serious injury problems, I would have been happy to see him join us. However, when we say that Arsenal need more defenders there is a caveat that should be added - any centre-half addition should be very good in the air. When I think of Phil Jagielka I don't think of a player who is famed for being aerially dominant. What I think of is a good ball playing centre-half, reasonably quick (though not as quick as he was - remember Nasri blasting past him at Goodison last season?) but also not particularly strong at heading. What Arsenal need is a strong defender - his ability with the ball at his feet is pretty much immaterial right now. That is why I far prefer the idea of Cahill, or even Samba, to that of Jagielka. Actually, if we signed only one central defender this Summer, I would rather we signed Sylvain Distin from Everton than Jagielka.
Despite all this Jagielka might not be a bad signing for Arsenal. Prior to becoming a centre-back he was a fairly redoubtable midfield player at Sheffield United. His signing would give us a player in the Grimandi mould, perhaps, capable of "doing a job" as a decent squad player - and competition for Alex Song. If Jagielka does come to Arsenal then he must be accompanied by someone with physical presence and the aerial strength to play alongside what we already have. In the same way that I would be happy for Samba to join us along with another centre-half, I would accept Jagielka as long as someone else came at the same time. Everton have set their asking price, now it's up to Arsenal to match it if they really want the player.


On a sad note Arsenal have announced the unfortunate retirement of our former young defender Ryan Garry. Just before the FA Cup Final in 2003 he made his debut in the six-goal demolition of Southampton at Highbury (the game where Pennant and Pires scored hat-tricks). At this point the youngster seemed to be firmly in Arsene Wenger's plans and looked to be the latest youth-team product with a good future at Arsenal. Sadly he was subsequently struck down with shin-splints, and broken legs, and his career at Arsenal (though it continued for another few years as the Club nursed him back to some fitness) came to nought. Ryan moved on to Brentford where he had some success as a player, but he has now been forced to call it a day as his legs can not cope anymore with professional football. Garry's story is one of terrible misfortune for a young lad who seemed destined for great things, but who missed out on the glory days through no fault of his own. Perhaps his story should be relayed to the likes of Jay Emmanuel-Thomas in order to make them realise that not everyone gets the chance to make a career, and perhaps they ought to knuckle down and work hard and ditch the attitude. I wouldn't be surprised to find that Ryan Garry ends up with some kind of job at Arsenal - after all, such class is what we hold dear.

Any chance of a signing tomorrow?
Posted by DvbrisG at Thursday, July 21, 2011