The Emirates Cup - our only silverware again? 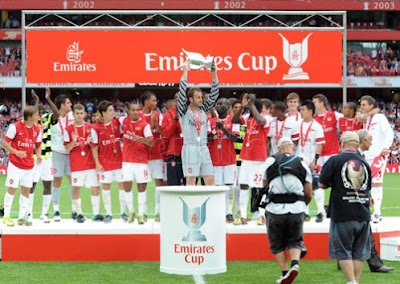 First of all I have to apologise for a blogless weekend. Circumstances conspired against me and I was unable to fit this in to a busy couple of days. I managed to get through two days on the cricket pitch without finding out the results of Arsenal's matches, so watched the games "as live".

Can anyone tell me how Arsenal are any different from last season? Back in May Arsene Wenger finally acknowledged that we do not defend properly and that improvement was needed to challenge for honours. So what the hell is going on? We have lost Gallas and Campbell - even Silvestre, for all his failings, played a lot of games for Arsenal. We have Vermaelen, Djourou, who is never fit, and Koscielny whom we know nothing about. The net result of this is that Arsenal are possibly even worse at the back than before. I will expand on this as we go on.

Let's start with the AC Milan game. For 65 minutes the boys looked quite good, from back to front. Up against a combative and experienced midfield comprising Flamini, Seedorf and Gattusso, I thought Wilshere and Frimpong were magnificent. For two youngsters to dominate that area of the pitch was a testament to their work rate - constantly closing down. It was no coincidence for me that Milan began to get on top as soon as Frimpong was withdrawn.
Arsenal got in front in the first-half after Arshavin suddenly remembered he was playing a football match and produced a superb run and through-ball for Chamakh. The Moroccan finished coolly, first-time, for his first goal at home for Arsenal. I was very critical of Chamakh after the game in Graz a couple of weeks ago. Against AC Milan he eased a number of my fears from that game. I thought he produced an outstanding display of power and touch against AC Milan and looked a real force up front. Again, he was taken off at a time when we needed someone to hold the ball up, leaving Theo Walcott to plough a lone furrow up front which allowed Allesandro Nesta to dominate that area of the pitch - this was yet another example of Wenger's tactical intransigence with Walcott completely lost as the lone striker, while Carlos Vela was stuck wide on the left. Having both of them through the middle would have been a better option. I must also give praise to Samir Nasri. He looks a different player so far this pre-season - perhaps the World Cup snub from France has given him a much needed kick up the backside. He was magnificent again against Milan, skillful and quick, and he was the real man of the match (despite the sponsors deciding to give the award to our goalscorer).
The inevitable concession of an equaliser came from the usual route as far as Arsenal are concerned - a free-kick played in to the six-yard box. Firstly, it wasn't a free-kick - you have to wonder what chance football has in this country when the referees can't even get it right in a pre-season training game (it got even worse against Celtic yesterday). When the free-kick was delivered Vermaelen was the wrong side of his man and (whatever Sky may say to the contrary) he nodded it in to his own net. Up to that point I thought Fabianski had looked quite confident, and made a few good saves too. However, I was saying to myself that this isn't Blackburn Rovers and he hasn't had any high balls to deal with. The first time the ball was delivered in to the six-yard box he stayed rooted to the spot and we conceded the goal. The fact that he played on Saturday, and Almunia (as Captain!!! - more below) played against Celtic would indicate that they remain the main goalkeepers at Arsenal. God help us.
A quick word on Koscielny is appropriate. His reading of the game, I thought, was excellent, and he broke up play superbly on a number of occasions. He looked like a player that would make an excellent sweeper. We didn't get to see him challenged aerially or physically, though that test will not be far away, you can be sure.
I couldn't understand the rapturous reception our goal received from the Celtic fans, until Milan substituted Gattusso - the Rangers connection still burns holes in the hearts of Celtic followers to such an extent that they go wild when someone scores against a player that represented them so many years ago. That is real hatred.
A 1-1 draw with AC Milan wouldn't normally be considered a disappointment at any time, but when you consider that the Italians are at least three weeks behind Arsenal in preparation for the new season you have to be concerned at how fatigued Arsenal appeared. If they're tired now, as Wenger claimed after the match, what state will they be in come May?

And so to yesterday. Once again Frimpong and Wilshere played and dominated in midfield. Arsenal started really well and a cross/shot from Theo Walcott was turned in at the far post by Carlos Vela. Jay Emmanuel-Thomas started up front and I was disappointed to see him replaced at half-time by a very ineffectual Chamakh. It would have been better, for me, to give Big Jay more of a run - especially given our lack of striking options. Arsenal continued to outplay their second-rate opposition (quite why this was the marquee fixture of the tournament I don't know - though the way it turned out Arsenal can feel justified in their planning) for the rest of the first-half. Jack Wilshere smashed a superb volley against the bar from the edge of the box - it reminded of some of those strikes we've seen from Scholes down the years, such was the brilliance of its execution. Just before half-time Bacary Sagna got himself on the score-sheet with a good left-foot strike, but the goalkeeping from Zaluska was Arsenal-esque.
A couple of subs for Arsenal at half-time didn't break the boys rhythm and Walcott set-up Nasri to stroke home a third early in the second-half. Game over...or was it? Well, this is Arsenal, so of course it wasn't.
A couple more changes did begin to upset the boys play - and Celtic suddenly decided to play two up front, which gave the Arsenal back line, now without Vermaelen, all sorts of trouble. After two games in as many days, the young midfielders began to run out of steam as Celtic came forward. The referee tried to give Celtic every opportunity with a quite ridiculous penalty award. Fortunately Samaras blazed it over the top. Arsenal didn't heed their warnings and started to find themselves getting overrun. The scenes of panic in Arsenal's defence were just the same as we saw at Wigan in April. Suddenly we were making Celtic Reserves look a good side. It was no surprise when Celtic finally got their goal - Almunia was outstanding all round as he kept Arsenal in the lead. A second Celtic goal made Arsenal even more panicky at the back, and Almunia continued to rack up the saves. Koscielny looked rather more pedestrian than the day before, when he came on for Vermaelen, and I am very worried by someone who was being torn apart by the likes of Samaras and Fortune. Kieran Gibbs was constantly out of position having come on for a very impressive Gael Clichy.
At the other end, numerous breakaways failed to make Arsenal safe, usually thanks to Theo Walcott cocking things up with poor passing or weak shooting. This is another hardy-perennial that Arsenal have failed to learn from.
In the end, and thanks to our Spanish goalkeeper, the boys held on for a 3-2 win. If these matches were not the wake-up call required for the Manager, then he really has lost the plot. The season is now 13 days away, and still we have no new goalkeeper, a lack of centre-halves, one fit centre-forward and no senior defensive midfield player - Song and Denilson are injured, Diaby (who is also injured, again) isn't good enough. To say that Arsenal will struggle if things are not sorted out quickly would be a complete understatement.

For those of us on captain-watch, there were some confusing messages this weekend. Thomas Vermaelen captained the side on Saturday (hallelujah) but was replaced in the role by Almunia yesterday (Wenger, of course, doesn't believe it's important to have an appropriate person wearing the armband). I just do not understand it. Worse was to come when Arsene announced that Fabregas WILL be the Arsenal captain this season. I find this so disappointing. How is it that someone who has spent the Summer orchestrating a transfer to a different club can continue as Captain of Arsenal? He doesn't deserve the armband anymore. Wenger did come out yesterday, though, and say that Fabregas must speak-out about his future when he returns this week. As open messages go, this was pretty clear - commit yourself or face the consequences (though I suspect Wenger-type consequences would not be too hard to bear).

Finally, I just want to round-up a few things, starting with the goalkeepers. As I said earlier, it seems that Almunia and Fabianski remain the players of choice in this position (at least until a replacement for one of them comes in). In the absence of a new keeper, and Wenger's complete reluctance to promote either of the younger goalkeepers, Almunia has to remain as number one. A look at one of the message boards, which is increasingly becoming home to Arsenal-bashers with nothing good to say about any of the players, shows Manuel as a real hate-figure. I just do not get this vitriol aimed at the Spaniard. Is he good enough to be first-choice at a club like ours? No, he isn't. Is he a very good back-up? Yes, he is. Does he deserve to be so vilified for always trying his best? Of course he doesn't. Get off his back because the way things are looking right now, this Arsenal team is going to need all the fervent support we can give it.
The big "winners" of the weekend were undoubtedly Wilshere and Frimpong. Wenger has said that the pair "give us more options". This tells me that Frimpong has secured himself a first-team squad number for the season ahead. There was also encouragement for Jack Wilshere who will not, it appears, be farmed out again this season. This is good news as far as I'm concerned. The only negative was that the Manager made his seemingly annual Wilshere comment that we must "be patient". This is the third pre-season in a row that he has come out with this crap. Get the boy in the team and let him do his stuff.

All in all, it's nice to win any game and any tournament. But the failings illustrated this weekend were stark. If those failings remain unchecked by Arsene Wenger we are in for a long and disappointing season, at the end of which the Manager will be leaving - if he gets that far.
Posted by DvbrisG at Monday, August 02, 2010