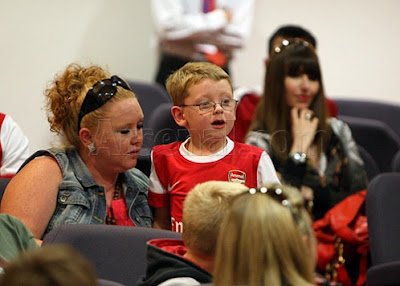 Cesc Fabregas finally made his statement yesterday to announce he will be at Arsenal for this season. Of course the usual nonsense will start again almost immediately, but we can feel free to ignore it until May next year. My thoughts on what has happened across the Summer have been made clear on here over the past weeks. With Cesc saying he is committed to Arsenal (and we have no choice other than to trust him) we can now move on. I still don't believe he should be the Captain, and his commitment will be easy to judge as soon as he sets foot on the pitch. I will not be singing his name this season (as I didn't with Vieira or Adebayor after their Summer's spent trying to leave) but I will not get on his back either. Fabregas plays for Arsenal so he deserves the benefit of the doubt. As for Barcelona, they also issued a statement to say that neither of the offers made for Fabregas exceeded €40m "in any form" (so we can assume that they offered some reserves to Arsenal as well as cash). The fact that they were not willing to go above £35m indicates that they don't quite value Cesc as highly as they should. Let's move on - there will be no more comment here, on this subject, until the end of the season (unless there is a particularly slow day!)

The boys are in Poland today to open the new stadium of Legia Warsaw. Both of our Polish keepers will be playing in the match for obvious reasons. There will be no Fabregas or Van Persie. Arsene Wenger says that the players who do line up today will not necessarily start at Anfield next week. Until we see his starting line-up today we can't even being to speculate as to whether or not he is being truthful. I have a very real fear that Fabianski will be starting the game at Liverpool and just thinking about it brings me out in a cold sweat. We'll have to wait and see. The game is "exclusively live on Arsenal TV Online" - unless you live in Ireland, of course, where it is live on Setanta. Why is it that the only place you can't watch Arsenal on telly is in their own country? With City and Spurs making money out of ESPN all pre-season you really have to wonder how Arsenal's business arm is not making deals like that.

Silly season appears to have reached its peak today with The Sun claiming Arsenal will offer up to £25m for Pepe Reina. The general consensus I can find from Arsenal fans is that this so ridiculous it's laughable. Wenger to spend £25m on a goalkeeper? I would be very, very, very surprised. Having said that, it would be a great signing were it to happen. I have emailed a friend who works as a sports journalist at The Sun to ask if it is just a space-filler. If he answers me I will let you know.

EDIT: My journalist friend has replied - he tells me that the reporter concerned is not given to transfer nonsense, and that he has a source in the Liverpool hierarchy. Is it true? We might never know, but we can always hope.