A decent point to start, Shay Given rumours grow

Reina: What goes around comes around - can't watch it without laughing 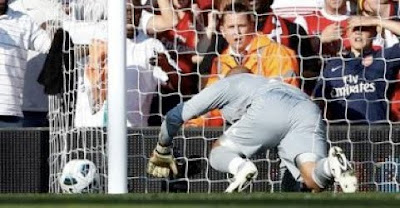 A point at Anfield. I'm not going to complain about that. Arsenal's second-half performance lacked pace against ten-men, but I think if you can come away unbeaten from the other big clubs you're doing okay. In the first-half I thought we looked good. The passing was crisp and quick, but I wanted to see Eboue running at Agger and Nasri taking on the pedestrian Carragher. I think if those players had been more direct we might have created some opportunities. I've seen people saying Chamakh did very little - that is unfair. How many times did Arsenal provide him with the service required. In the second-half I watched him closely as he laid the ball wide and then made his run for a cross in to the box that would never come. If Chamakh plays then Arsenal must use the ball to bring him in to the game properly.
Joe Cole's sending-off was fair. He took off recklessly and caught Koscielny. The fact that even Redknapp and Keys said it was a red card tells you all you need to know. I had a text from a Liverpool fan at half-time saying it was never a sending off. When I replied "are you serious?" I was told to take off my "bias glasses" - watch it again my friend. I must say at this point that Cole's foul was nothing like the Taylor, Shawcross, even Karl Henry, fouls of recent times against Arsenal - Cole is genuinely not a dirty player. However, it was dangerous and could have done serious damage to Koscielny. Also, I must point out to Martin Tyler that the reaction of the Arsenal fans was NOT what got him sent-off - those 3,000 Gooners in the crowd of 40,000 might have been much louder than Sky's beloved scousers, but they did not influence the referee. Somehow Steven Gerrard got away with only one yellow-card for his three heinous fouls in the game - how does this guy continually get away with it? As for Koscielny's red-card, it just showed how weak the referee was in that he felt the need to even things up, however late in the game.
A catalogue of defensive howlers led to Ngog's goal for Liverpool and Almunia got his angles slightly wrong to be beaten at the near-post. He should not take the blame on his own, as some of the various online forum contributors would like - what about the roles of Clichy, Arshavin, Wilshere and Vermaelen? Until such time as a replacement is signed (more below) Almunia, for all his faults, remains the best we have. I was extremely pleased when I saw he was playing yesterday, but frustrated to see him lead the side again - once more the Arsenal captaincy is devalued.
I scared the living daylights out of my unsuspecting five-month old when Arsenal scored - and I thought it was a fairly tame reaction on my part to a last-minute equaliser! Having made a "save of the season" contender from Rosicky, there seemed no way past Jose Reina. However, Chamakh got himself in where it hurts (more of that please) and Reina literally threw the ball in to the net as it bounced back off the post. I've watched it back about ten times this morning and I can't help but laugh at it. It's hilarious. This was a moment of pure Karma as the Arsenal Gods got their own back for his role in forcing the Barcelona shirt on to Fabregas. What goes around comes around Pepe, and it came around for you yesterday.
As I said, I'm happy with the point, despite playing against 10 men for the second-half. If we can get the players back to fitness (if, if, if) and Wenger makes the signings (IF, IF, IF) then we can challenge. There should be a decent win on Saturday as long as the boys go out with the right attitude, and then we can be off and running.
The Shay Given to Arsenal rumours are becoming more prevalent. They've been fuelled by some comments by his former Newcastle team-mate, Warren Barton, on TV in America - he actually says very little if you read the quotes. As I said the other day, I don't think he will solve all our problems at the back as he does not dominate the penalty area. However, he is twice the goalkeeper that any of our current crop are. My concern is that City do not have to sell any player to a Club they consider a rival. We can sit and hope - rather Given than Schwarzer any day - Shwarzer is no better than Almunia. If (that word again) we could add Given and a couple of centre-halves - preferably at least one aerially dominant player like Gary Cahill then we can challenge the ominous looking Chelsea.
I'm not sure if there will be a blog tomorrow as I am playing golf all day, with an awful weather forecast, so I may not be in the mood for writing! The signing of Shay Given, however, would certainly bring me to the laptop.
Posted by DvbrisG at Monday, August 16, 2010