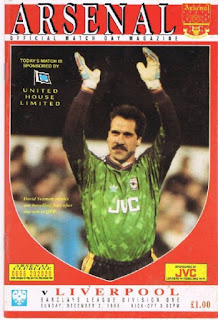 Match programme from the day

Twenty-five years ago yesterday (I must admit I had thought it was today so I've mugged myself off already) came what, with hindsight, should be seen as one of the most important games in the history of English football. The performance of the Arsenal team on that day marked the end of something that had been a constant in the domestic game for almost twenty years.
It had been a strange couple of weeks for an Arsenal team that was still unbeaten in the First Division. The Club had been deducted two points following the punch-up at Old Trafford before hammering Southampton at home in a game that saw Alan Smith start a scoring run that lasted most of the rest of the season en route to another golden boot. This had been followed not long after by a great comeback win at Loftus Road with three late goals, including a wonderful finish from young Kevin Campbell, and a memorable v-sign of celebration from Tony Adams to answer the non-stop abuse he'd suffered all afternoon from the QPR fans. Four days later, however, things were not so great as Manchester United stuck six past the tightest defence in the country to knock us out of the League Cup at Highbury. With the visit of Liverpool looming it wasn't the best sign. Put together with the points deduction the mood was a little gloomy with the t-shirt sellers doing a storming trade in new products bemoaning the fact that the FA might have just handed Kenny Dalglish a Christmas present in the shape of the League Championship.
The Liverpool team that arrived at Highbury was, like Arsenal, unbeaten in the league. Thanks to the points deduction they were also safely above Arsenal in first place. They were still the dominant side in the English game and the defending Champions. What followed, live on ITV, was a demolition that spelled the end of that dominance. Arsenal's win was so comprehensive that it ultimately sent such a shockwave through Liverpool FC that everything had unravelled within a few months, with Dalglish resigning and Arsenal going on to win the Title at a bit of a canter. Obviously even the greatest of Liverpool teams had been defeated on occasion (they don't have a gold trophy) but rarely had they been totally outclassed. It quickly became apparent that they were maybe all getting old together and they simply couldn't live with the new generation. A quarter of a century on and they've only come genuinely close to winning the Title again on one occasion.
Arsenal were awesome that December afternoon. The first goal was poked over the line from close range by Paul Merson when Liverpool failed to clear a corner - Barry Venison's mullet wasn't quite big enough to prevent the ball going in. We were more than deserving of the 1-0 lead at half-time. In the second-half, with Arsenal attacking a packed North Bank, Anders Limpar took the game over. The pace of both he and Merson was too much for the Liverpool defence with Hysen given a particular chasing by the Super Swede. Not long after half-time Limpar was fouled in the penalty area and Lee Dixon smashed the resulting spot-kick in to the top corner. Coming when it did it meant that Arsenal could play their game with some freedom. We should have had another penalty for another foul on Limpar and Liverpool simply couldn't seem to carry a genuine threat to David Seaman's goal.
In the final minute Arsenal turned on the style and put the most stunning exclamation mark on the result. A ball out wide found Merson with his back to goal and his beautiful back-heel put Alan Smith in on goal to the right side of the penalty area. Smudger hit a superb right-foot shot across Grobelaar and in to the far corner of the net to send Highbury delirious and prompt Brian Moore to get seriously excited on The Match.
At the time nobody could have predicted the impact that the 3-0 scoreline, and the utter thrashing, would have on such an experienced and high quality Liverpool team. Twenty-five years later it is easier to pin-point where things changed in English football. The only disappointment to me is that it should have been George Graham's Arsenal that went on to dominate the 1990's, only to be usurped by Ferguson's Manchester United. Still, we'll always have the memories and the satisfaction of de-railing the Scousers once and for all. You can see the highlights of the game here - enjoy!
Posted by DvbrisG at Thursday, December 03, 2015