Wasted opportunities will cost us this season 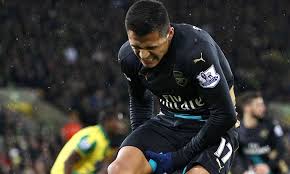 We've now dropped seven points out of nine at a time when we needed to push on. The run of fixtures up to Man City in Christmas week, as I've said here before, was the sort from which Arsenal ought to be taking maximum points if they wanted to genuinely challenge for the Premier League. Consecutive games against the likes of West Brom and Norwich City are the kind that potential Champions do not go dropping points in. More concerning is the fact that, for most of the second-half yesterday, only one team genuinely looked like getting a goal and it wasn't Arsenal. Even more concerning are the injuries that are totally out of control.
We heard from Arsene Wenger on Thursday that Alexis had a hamstring problem but would probably play at Norwich. This came less than 48 hours after Wenger had left him on the pitch for the full 90 minutes despite the team being 3-0 up with over 20 minutes left to play. Yesterday the inevitable happened after around an hour and Alexis limped off for an extended period in the treatment room. Arsene then tells us that he had asked him if he was fit to play and Alexis said that he was. Of course he did. Alexis is that kind of player. I seem to remember Wenger giving the exact same response when Alexis got injured last season. Since when was it down to the player to say whether or not he was fit? Wenger says Alexis told him he wanted to play. Well, Arsene, so do I but I'm not going to get a game, am I? Having said that, the way the injuries are going it's probably between me and Gunnersaurus for a place on the bench on Saturday. We are also probably unlikely to see Santi Cazorla this weekend after that knee injury he picked up in the first minute of the second-half yesterday. Koscielny had already limped off with a hip injury. Oh, and Kieran Gibbs has a calf problem which is why he was nowhere to be seen yesterday. If someone can please tell me what benefit we've had from employing Shad Forsyth I'd be glad to hear it. It's certainly not nice to see him, to see him nice.
The game itself saw us start just fine. There were even a few shots at goal and the pressing game saw relentless pressure building up on the Norwich team. Eventually this prompted the error from John Ruddy that Alexis took advantage off to brilliantly play in Ozil for our goal. However, this is where this team has the most frightening mental problem. For some reason they seem to think that once they are ahead they can stop playing properly against lesser teams. They did it at West Brom last weekend, and on numerous occasions in the past. You'd think experience might teach these idiots that they aren't good enough to mess about against anyone. They can't defend, for a start. If anyone was surprised when Norwich equalised they certainly haven't watched Arsenal in recent times. You have to feel sorry for Petr Cech in these circumstances. If it hadn't been for his outstanding ability in the second-half we would have lost 2-1.
We created absolutely nothing after half-time and I can't recall a single save being made by Ruddy. Time and again the ball was worked in to a wide area and then the cross was awful (Oxlade-Chamberlain put in a couple of decent balls when he came on). The state of Arsenal's crosses is really one of the great embarrassments of modern football. It isn't difficult to cross a football. When you have a striker who is good in the air it is criminal to constantly keep hitting the ball along the ground at the nearest defender, or hitting it aerially, but nowhere near him. That's not to say Giroud would have got on the end of them yesterday as he spent the game waving his arms about and throwing himself to the ground whenever a defender made contact - such is the habit he seems to develop when not under pressure for his place in the side.
It had no real bearing on the outcome of the game, but I can't let the assault on Alexis go past without comment. Last season we saw Mathieu Debuchy pushed into the hoardings when already off the pitch against Stoke causing an injury that has effectively ended his Arsenal career. Ryan Bennett's push on Alexis yesterday could have been just as serious had a cameraman not been there to break his fall. Bennett has claimed that he was trying to "stop" Alexis. I kid you not. After all, everyone knows that the best way to stop someone in forward motion is to push them in the back! It summed up what an idiot of a referee Mr Moss is that you actually heard him tell Alexis "you were off the pitch anyway" when he complained. So there you have it, as long as you've crossed the whitewash you can do whatever you like to the opponent.
One final thing - that damn kit! I've often heard the green kit from 1982 referred to as "unloved". What does that make this particular piece of s**t? Why were we even wearing it yesterday? I'll tell you why; it's because Arsenal can't shift it and are trying to boost the Christmas market. It seems that the players might not like it either given the three performances we've seen in it at Sheffield Wednesday, Bayern Munich and Norwich. The simple fact is that it isn't an Arsenal kit and we shouldn't be wearing it. Ever.
Posted by DvbrisG at Monday, November 30, 2015