Arsenal on the edge 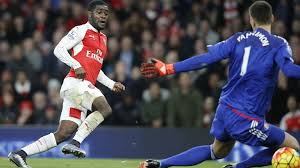 Our defending is a problem. Without Coquelin to protect the back-four they are totally exposed and their weaknesses are being exploited. Without Petr Cech in goal we would have been in all sorts of trouble these past couple of weeks. Against opposition with better quality strikers we are going to pay the price. Mertesacker seems to get slower by the week, Koscielny lacks positional sense (though I think he is constantly aware that he needs to be ready to bail out the BFG at any given time) while Bellerin has entered a serious dip in form and is being found out down the outside. Nacho Monreal is still going about his business pretty well. I'm not overly worried by Bellerin as this happens to young players, but perhaps a week or two watching from the bench might do him some good. All of this could be less concerning if we had a fit Francis Coquelin. Flamini has to begin to understand his role and start to execute it.
I can never criticise Flamini for effort. However, a player of his experience should be able to work out that he doesn't have any need to get himself around the opposition penalty area, almost at any time in any game. Ian Wright picked out a situation on Match Of The Day on Saturday night where both Flamini and Ramsey were in the Sunderland box. What possesses Flamini to get himself up there? We don't generally see Coquelin getting involved in attacking areas and Flamini is basically his replacement in the team. At the same time, why is Flamini not getting told to get back? When he gets carried away like that surely Mertesacker, as Captain, should be telling him to get back and protect us from the potential counter-attack that a decent side would no doubt exploit? Why are Wenger and Bould not off the bench screaming at Flamini to remember what his job is? This is a more acute problem now that Ramsey is back in midfield as he will always make a point of getting forward and is less effective in the tackle than Santi Cazorla.
On Saturday we did get the win, though we didn't play particularly well. Thankfully Sunderland were lacking Defoe on Saturday and were unable to punish us. Going forward we can be a different story. Mesut Ozil is very much in the best form of his Arsenal career and his pass to Joel Campbell for the opener was a corker. Campbell finished confidently and is gradually becoming more appreciated by the fans who are noticing his hard work around the pitch - the likes of Oxlade-Chamberlain, who are more talented players, should be taking note. I am concerned, however, by what I see as a divide in this squad. When Campbell scored only the Spanish speaking players - Monreal, Bellerin and Ozil - went to him (my Dad said that Giroud was the first one to congratulate him but that is wrong as it was Monreal). I've noticed this kind of thing a few times, with the French players largely congregating as a group, and when there is a youngster on the bench they are almost totally left out when the substitutes are mucking around at half-time. I find that a concern and does not lend itself to the "great spirit" the Manager always bangs on about.
Olivier Giroud made up for his own-goal with a superb finish for the second, capping off a really good move between Monreal and Ramsey and then the boyo wrapped things up himself in injury-time. In between times we were indebted to Cech, and Sunderland's awful finishing, for keeping us in front. Having said that, we were also profligate in front of goal on occasions.
Three points was massive with Man City and Man Utd both failing to win. We have to keep winning and take advantage of the fact that there is no outstanding team in this Premier League season. Any side putting together a winning run of eight or nine games could see themselves clear. A boost in the January transfer market is also needed.

Before I sign off I want to add my voice to those paying tribute to Ernie Crouch, an Arsenal match-going fan since 1934 who sadly died on his way to the game on Saturday. Many Arsenal fans were acquainted with Ernie, including my Dad and brothers, and I think we can all hope to be following his example and watching The Arsenal in to our 90's. I think it would be a fine gesture for the players to wear black armbands in Athens this week in honour of Ernie. RIP.
Posted by DvbrisG at Monday, December 07, 2015