Another fail from the physios, Arsenal need some 1989 spirit tomorrow 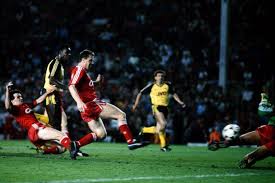 Santi Cazorla's injury sustained at Norwich looks to be as bad as I feared at the time. The way it happened was reminiscent of an injury to Robin Van Persie that he suffered in the act of scoring in the League Cup Final against Birmingham. It seemed clear to me that Santi had done something fairly bad to his knee. It is now emerging that he may have a ruptured ligament and could even be out for the rest of the season. At best he will be gone until at least March. With this being the case I have to question how our medical team allowed him to stay on the pitch for the entirety of the second-half at Carrow Road.
Colin Lewin took over from his cousin Gary as Arsenal's physiotherapist seven years ago. I had long felt Gary was overrated in his role, especially following broken legs to Keown and Upson that saw them both try to play on following treatment from our medical man on the scene. The way the injuries have gone since then it seems that Colin is not any better. Worse than that he is backed up by a massive team of physicians from masseurs to doctors. Now there is clearly nothing they can do to actually prevent an injury like Santi's, but allowing him to play football for 45 minutes on a ruptured knee ligament is surely a failing of epic proportions.
I don't have the answer to Arsenal's injury problems. I doubt anyone at the Club has either. What I am sure of, however, is that the current medical team at Arsenal Football Club fails far too often to get things right. How many times have we heard of a player suffering a "setback" in their recovery? Why is it that when one of our players suffers a sprain or a strain they are gone for months at a time? I won't go over old ground any further but Arsenal need to get this sorted and that starts with dealing with the incompetence that is on display.

I read a Tweet earlier saying that tomorrow reminds the author of Anfield 89 in terms of the situation in which we find ourselves. When you think about it this is absolutely spot-on. We need to win by two clear goals and are not really fancied to do so. Now Olympiacos are no Liverpool of the 1980's, but their stadium is notoriously difficult to get results in for visiting teams (unless you are Bayern Munich, perhaps). The reason we need a two goal win is because we produced two terrible performances a short while back in the competition. Where it was Derby and Wimbledon in 1989, think Zagreb (away) and Olympiacos (home) in 2015.
The key to winning at Anfield was the ability of that side to defend so well, yet create enough to get the job done. I fear that we are always more likely to concede at least one goal than we are to keep a clean sheet with this team. There is no doubt we can create enough to score the goals we need, but we've been in this position in Europe a few times in recent years, always coming up short.
Do we have a Michael Thomas type of player in this side? I believe we do, in the shape of Aaron Ramsey. Like Mickey, Ramsey is keen to get forward and score goals. He is able to run up and down for 90 minutes and will still be bombing around at full-time assuming our physio hasn't got his hands on him by then. He also divides opinion, as Thomas did, because he tries to be too flash too often when keeping it simple would be so much better for the team. Can he flick in an injury-time winner though? Olivier Giroud can fit the bill in the Alan Smith role, so if Rambo can be Michael Thomas we're home and hosed.
I would like to see us go for it properly tomorrow. This would be a great time to do something different with the line-up and formation. We need goals and we need to throw Olympiacos off their game. Would it not be an ideal time to go 4-4-2 with Giroud and Walcott up front together? I know a midfield of Ramsey and Ozil could leave us badly exposed at times, but is that not a risk worth taking in the circumstances? Anything other than the result we need doesn't bear thinking about as we don't want to drop in to Thursday night football. Go for broke instead.
Whatever happens tomorrow in Piraeus it won't be the reason for us failing to go through. The fact is that we put ourselves in this ridiculous situation by losing those first two games in the group. Frankly we should have the cigars on tomorrow night and be getting the key players rested and ready for the weekend. Instead of that we need to them to put in a big shift and secure our place in the second round and, more importantly, out of the Europa League.
Posted by DvbrisG at Tuesday, December 08, 2015