Giroud + Campbell = no Spursday football for us 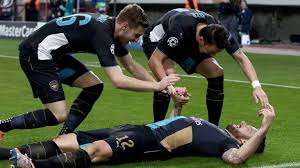 Sometimes Arsenal are bloody superb. Last night really was one of THOSE nights when it all comes together on the pitch, from front to back, with perfect tactics, great football and the required result. Everything seems brighter this morning thanks to Arsenal's victory over Olympiacos. For two much maligned players it may provide something of a watershed in their Arsenal careers. For the Manager it means total relief that the first two games of the competition can be forgotten (as long as the lessons are learned and not repeated). For the fans it means no Spursday night football in the Europa League. For the Club it means more money for reaching the second round again. For the season it might just allow us to make a proper challenge for the Premier League.
I think not many of us were convinced Arsenal would progress last night. The team has the ability to self-destruct and come up short, especially away in Europe. Olympiacos are not a top side, but they have an enviable home record. For Arsenal to go there and match the result Bayern Munich got in Piraeus says a lot about the qualities this squad does have. When they are focused and up for it this Arsenal team can do the business. What they need to do now is to produce this kind of thing consistently.
Olivier Giroud takes plenty of stick. I would say at times that it is deserved. At Norwich last week, for example, he was totally disinterested. He misses chances in big games far too often. However, when he is on song like last night he is a fine centre-forward. I suspect that kind of display is due in no small part to the return of Theo Walcott actually adding some pressure to Giroud's position in the team. Whatever the case may be, Giroud produced the goods on the big occasion last night - a Champions League hat-trick in a crucial game is worthy of great credit. In a group that started with him getting sent-off in Zagreb he has ended up the key reason for our qualification for the knockout rounds. He actually has a fine scoring record since his arrival at Arsenal, despite appearances to the contrary. I have long said Giroud is a good striker, not a top striker. Last night makes me look wrong and this pleases me.
The other man who should be getting some personal credit this morning, in the face of the most unjustified criticism from the fans, is Joel Campbell. Having been given a proper run in the team Joel is now there on merit. His workrate is possibly up there with that of Alexis. What has become clear in recent weeks is that he is not lacking in quality. He played a wonderful ball to Alexis for the final goal against Zagreb, scored a lovely goal himself on Saturday, and last night topped all of that. Campbell's work in the build-up to the second goal was a showcase of an all-round kind of player. He made a great run to allow Ozil to find him in the first place, but then he had to show strength to hold off a couple of defenders, a good first touch to bring the ball down, and then great quick feet to get himself just a yard of space. To then pick out the (excellent) run of Giroud with that reverse pass was the stuff of dreams. It was probably even better than Ozil's incredible ball to Ramsey that helped set up the opening goal. Breathtaking football and Joel Campbell is finally getting the credit he deserves for his hard work and patience.
I don't really care who we get in the next round. Obviously you'd probably prefer someone like Zenit, regardless of the long journey in to Russia, but just being there is the important thing this morning. Avoiding the Europa League allows this already stretched squad to play Premier League football without having to come and go around Europe on a Thursday night. If Arsenal can go on and, hope of hopes, win the Premier League then it might just be that a game in the Champions League in Athens was one of the key victories that secured it.
Posted by DvbrisG at Thursday, December 10, 2015