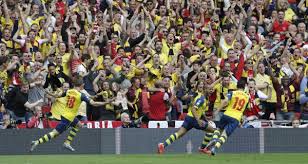 So we are in to the final hours of 2015. It has been a successful year for Arsenal with the FA Cup in the trophy cabinet once again. Across the year Arsenal have won more points than any other Premier League side and, though it's less relevant than a "Premier League" record, it shows that the team has done extremely well overall. The key now is to keep that going in to the second half of this season and earning more points than anyone else between now and May. With two trophies in two seasons now is the time to kick on and secure that Premier League Title for the first time since 2004.
My greatest moment of the year was when Theo Walcott slammed in the first goal of the FA Cup Final in front of the Arsenal fans. We'd missed a few chances already and most of us were getting edgy about it. When Theo volleyed that ball past Given, and the net billowed with the ball hitting it, there was an explosion of noise from the Gooners. It was a proper Wembley celebration of a goal. You can see in the new year with the BBC highlights here or the FA highlights here. They're worth watching just for Theo's and Alexis' goals. Memories to last a lifetime. 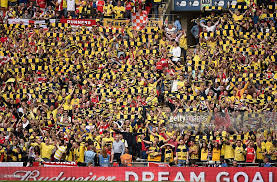 Happy New Year to all of you, near or far. Here's to a successful, trophy winning, 2016 for The Arsenal. A signing or two in the next couple of weeks and it's ours for the taking. I think even Arsene Wenger realises that this time around. 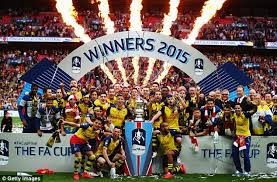