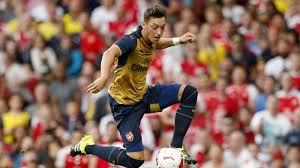 So we sit top of the Premier League at New Year. I suppose it's only Arsenal who could be second at Christmas, lose 4-0 on Boxing Day, and find themselves top before the year end. It's also a sign of how mad this Premier League season has been so far with everyone beating everyone else (except for Aston Villa) and Leicester in contention at the halfway point. Arsenal and Manchester City should be soaring away from the rest but both sides have dropped cheap points to leave them scrapping with all the others. For the neutrals and Spurs fans it must be very exciting but for us it is frustrating at times and brilliant at others. I've said it before, but if someone offered you this position after losing at home to West Ham in August you'd not be upset in the slightest.
Mesut Ozil is currently the best player in England. He had been setting up goals early in the season without being spectacular. However, it was following his last minute goal at home to Bayern Munich that he has gone in to overdrive. His missed penalty against the same opposition a couple of years back had seen his form leave him alarmingly. Perhaps scoring that goal was some kind of personal redemption. There can be no doubt now that Ozil is imposing himself on this Premier League season and is leading Arsenal's assault on the Title race. I really want to see him take on his defender more with the ball at his feet, and certainly to score more, but his passing ability is off the scale. He can pick anyone out from the most ridiculous of angles and Arsenal are reaping the benefits of that. I don't like the comparisons to Bergkamp but if he can keep going the way he is, and Arsenal can win the Premier League, then even I might concede that he is getting up there near to Dennis. 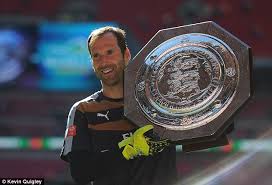 Despite the defeats we've suffered this season, including absolute hammerings at Sheffield Wednesday and Southampton, our defending has actually improved in general. Yes, we can be much better, but it's getting there. The main change at the back is down to the presence of an actual goalkeeper instead of the long run of impostors we've been dealing with since Jens Lehmann was dropped by Wenger. Petr Cech is possibly the most important signing Arsenal have made since Thierry Henry in terms of the effect he has on the team.
I would prefer to see Cech having less saves to make than he does. However, it's nice to have a bloke there who you feel confident will actually stop most of them from going in to the net. The opening day disaster against West Ham was a blip and he has gone on to organise those in front of him, while inspiring confidence in the whole team that they actually have a last line of defence who might be able to keep them in the game. He rarely makes the spectacular save which, for me, is always the sign of a top goalkeeper. The best goalkeepers are usually in the right place when it matters and don't need to be flying across the goal time after time. There was a save in the Man City game last week that struck me as the difference between Cech and Szczesny, for example. Wilfried Bony won a header from a corner late in the game and it was heading towards the roof of the net. It was a ball that a top goalkeeper should keep out, but I wouldn't have been convinced Szczesny would have. Cech, on the other hand, took a step to his right and caught the ball just above his head, calm as you like. As an outfield player that must give you so much confidence to see your goalkeeper totally in control of the situation in his penalty area.
David Ospina took the popular blame for our poor opening to the Champions League campaign and, yes, he made a mistake at home to Olympiacos. However, it wasn't his fault we lost those two games - the rest of the team was totally woeful in those matches. Ospina was extremely cruelly singled out. It wasn't Ospina's presence that cost us in those games, so much as Cech's absence. That confidence he gives his defence, and the organisation he puts in place in front of him, was just not there. Ospina is a very good goalkeeper and he did superbly at times last season. I find it harsh that he found himself subjected to such stick. But those games provide the perfect illustration of how important Petr Cech has become for Arsenal in such a short time. Yes, we've lost games with him in the team. Yes, he's been at fault on a couple of occasions. However, he has become a key man in this Arsenal squad and when Cech plays well then Arsenal look so much better. 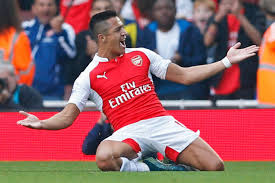 Injuries have once again been a feature of our season. We don't do niggles at Arsenal. If it's not a serious injury that keeps the player out for months at a time then it doesn't happen. It also happens to a number of key players for us. I fear Cech suffering something nasty as much as I do Ozil right now. However, it's the players we are already without that makes a sobering list - Wilshere, Rosicky, Welbeck, Arteta, Cazorla, Coquelin and Alexis are all players who would ordinarily be in the matchday squad. It says a lot about the character of a guy like Mathieu Flamini or Joel Campbell that they have managed to keep Arsenal winning in the absence of those players. Flamini should get particular credit for his role in the last month or so.
It seems unlikely to me that we will see Wilshere or Welbeck this season. Arsene says Rosicky could be training in January but I will believe it when I see it. Coquelin and Cazorla are nowhere close to playing until at least early Spring as far as I can see. We need to sign a midfield player and that will seemingly happen sooner rather than later - credit to Arsene and co for that, even if it's a player most of us know nothing about. In the meantime the players that are left are slowly being run in to the ground and that must be a worry.
The man who is going to come back, hopefully, before too much longer is Alexis Sanchez. His injury may just have turned out to be a blessing. It has forced him to get the rest he clearly needed after non-stop football over the last three years or so. A fully refreshed Alexis coming in to the side for the last four months of the season could be massive for this Arsenal team. If Ozil can keep his form going and combine with the magic of the magnificent Chilean then Arsenal could get over the line. It will free up space for Giroud and Walcott to play around each other up front as and when required, while allowing more rotation and freshness for the likes of Campbell and Oxlade-Chamberlain. Alexis has already had a huge impact in the first half of the season - the game against Manchester United being the best example of his outstanding quality. It was also one of the finest performances we've produced as a team this season.

We have a great chance to win the Premier League this season. The Arsenal squad includes some World Class players in the shape of Cech, Koscielny, Ozil and Alexis (I'd be tempted to add Coquelin to that list in terms of his ability to play his particular position on the field). If we can supplement that in January with a midfield player and another striker - because Welbeck isn't coming back any time soon - then the Title becomes ours to lose. The first half of this season has put us in a great and largely unexpected position. I just hope they can make it count come May. The second half of the season includes some very difficult away games which could easily be the difference between Champions and plucky failures. The points are there to be won and it's up to Arsenal to go and win them.
Posted by DvbrisG at Wednesday, December 30, 2015