Not even remotely shocked 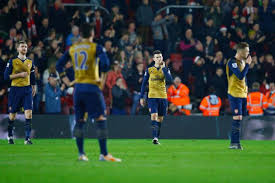 I hope everyone enjoyed a fine Christmas. Mine was spent, as ever, with family. My two boys had a great time and were rewarded with a few Arsenal goodies delivered by Father Christmas. I did have to spend some time yesterday at A&E with my wife after an accident with some boiling water but it didn't put too much of a downer on the celebrations. What it did instead was to leave me totally unfeeling about the lack of effort put in by the players last night at Southampton.
I feared this sort of thing after the great win against Manchester City. Unfortunately this bunch of no-marks have a terrible habit of letting their arrogance overtake them far too often. There is nothing wrong with losing a game. It happens. However, there is everything wrong when you lose a game simply because you can't be bothered. There is even more wrong when it ends in a humiliating scoreline like it did yesterday. Yet again they went on to that pitch thinking that turning up would be more than enough to beat a side in bad form. How many times does this have to happen before they get it in to their thick skulls that they aren't good enough to do that? The Manager must sense when the players are in this mood yet he seems incapable of doing anything to stop it. Or is he the reason for it?
I've seen some people saying the players were looking tired last night. Nonsense. It was five days since they played against City. I was concerned that one or two weren't rested, but that was more because I could see Wenger making six or seven changes at once for the Bournemouth game and costing us the points there instead. The eleven players that started the game should have had plenty to give Southampton a hard time. Of course there isn't actually a lot available at the moment to "rotate" properly, but that goes back to yet another wasted Summer and we've done that do death.
The referee and linesmen certainly played their part last night. A marginal offside could easily have gone our way for the first goal (more of which below), the second goal was the most obvious off the ball foul you will ever see - all three of the officials didn't see it, while the idiot with the flag somehow gave a corner for an obvious goal-kick leading to the third goal. It says a lot about how bad we were that, even with the officials handing Southampton their first three goals, a four-nil scoreline was a fair reflection of the game.
That first goal was sadly indicative of our play. We'd missed a chance shortly before when Monreal should probably have scored, but then we showed how we weren't at the races. The cross was allowed to be played in with nobody getting even close to thinking about closing down the play. Mertesacker (who I felt had his best ever game for Arsenal on Monday, only to follow up with one of his worst yesterday) then nodded the most aimless of defensive headers straight back in to the midfield. You can do nothing about the incredible strike that hit the net thereafter, other than to curse your luck that you were the unfortunate victims of the only time that bloke will ever hit a ball like that - it reminded me of a goal Neil Mellor once got against us for Liverpool.
There wasn't a single player worthy of any praise last night. We were all over the place throughout. The defending, as a team, was unforgivably bad. Where had everyone gone for their second goal? What were Chamberlain and Mertesacker doing for the third one? What was Mertesacker doing for the unjustly disallowed Long back-heel in the first-half? What was Cech doing for the second disallowed goal? Or for the third goal which was headed in from the sort of range that used to see Almunia in the back of the net before the ball? As I said, nobody played well and everyone should be taking the blame.
With less than 48 hours between matches there must surely be a change or two for tomorrow against Bournemouth. The problem is that we can only make a couple before we're in to playing kids. Debuchy appears to have been bombed out of the squad before being sold in January (and rightly so, such is the nonsense he's been coming out with in recent weeks). Gibbs could come in somewhere on the left, Gabriel for Mertesacker or Koscielny, and possibly Chambers for Flamini (though I wouldn't like to see that). Bournemouth have done well in December so they won't be a pushover. We've dropped too many points away from home so we can't afford to drop any at all at home. Worryingly this team has missed five opportunities to go top of the Premier League this season. It strikes me they have a mental block when it comes to being put under that pressure. It's time they sorted it out.
Posted by DvbrisG at Sunday, December 27, 2015