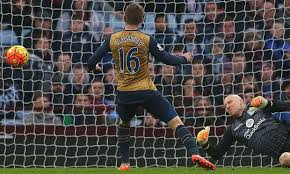 I thoroughly enjoyed the display at Aston Villa on Sunday. We have a great record at Villa Park but that didn't mean I was any less nervous ahead of the game. Coming off the back of a big midweek game in Europe, against a side well overdue a win, things could have easily gone wrong given the record of this squad for implosion. An unchanged XI, named pretty much because there are no other real options, meant that any heavy legs would only get heavier as the game wore on. To control the game the way Arsenal did was, hopefully, an indication that the times are now changing.
I thought we made a slightly slow beginning to the game and it looked like Scott Sinclair might be about to give Nacho Monreal a tough time. There was one early, but comfortable, save for Cech as Villa got on the front foot. However, when we did get hold of the ball and started to pass it we got on top quickly. I was frustrated at the lack of shots we were having, as ever, given how we were dominating the ball and the territory. It was clear early on that Theo had the beating of that idiot Alan Hutton and we didn't use him enough. When Flamini finally played a lovely ball in to the space for Theo you just knew that Hutton would bring him down. I'd like to know what Mr Friend was doing to not give the penalty straight away. He was in the perfect position to see the incident so why the delay? Having finally pointed to the spot he then failed to book Hutton despite the fact that Theo was a touch or two away from a clear shot at goal. Having scored in midweek with a penalty to the right of the goalkeeper it was nice to see Giroud mix it up and go the other way to make it 1-0.
What followed was as close to a training ground exercise as you can get for the rest of the first-half. Villa couldn't get near the Arsenal players but we still wouldn't shoot. When we finally did break properly again it was just a wonderful piece of football. Ramsey, playing his best game of the season, won a good tackle to get the ball to Theo. A lovely pass from Walcott set Ozil clear on goal and he knew exactly where Ramsey was (Ozil didn't even seem to look, such is his mastery of the pitch at the moment) before sliding it across for a tap-in. Arsenal were  2-0 up and the game was basically over. Meanwhile Alan Hutton had turned in one of the worst displays of professional football I have ever seen, totally outplayed by his winger and only managing to find the touchline with every pass he played. You'd never know he played for Tottenham earlier in his career.
The second-half saw Arsenal more than content with their 2-0 lead and, following on from Wednesday night in Greece, I was happy enough with the way we played after half-time. Villa maybe threatened (though that might be the wrong word for them having one reasonably dangerous header) once or twice but I did feel we could easily step things up if needed. If there was a disappointment for me it was the performance of Alex Oxlade-Chamberlain when he came on. For a lad who we are told is desperate to force his way in to the side he played like someone wanting out. There were two or three times we looked towards the right and he was either standing still or trotting along, happy to let Bellerin do more running than he should have had to. When he did burst in to life it was obvious that The Ox had the beating of the Villa defence, but there was nowhere near enough of it from him as far as I'm concerned.
It was a great week for Arsenal, all told. We got through in Europe and book-ended it with two good wins in the Premier League. The players now have a decent break before starting the Christmas programme on Monday against Manchester City. We will learn a lot about our chances next Monday, but I am worried that the squad will not be able to cope with the frequency of fixtures, and the massive number of injuries, over Christmas. Time will tell. Oh, and we've got a visit from Messi and Neymar to look forward to - rather that than a Spursday night game.