Santi and Alexis lead the way to a reasonable European tour 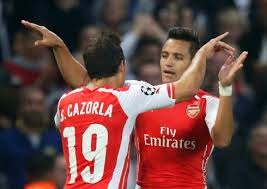 Stars of the show against Besiktas

It wouldn't be accurate to say that I enjoyed the game yesterday. I definitely enjoyed the result and, in that case, I've had all the entertainment I require. It should have been a lot easier than it was in the end, regardless of the scandalous red card for Debuchy as Arsenal missed a number of chances. Jack Wilshere missed when one on one with the goalkeeper, then Santi Cazorla missed the goal with the keeper 25 yards off his line. In between times we had a huge let off when the referee failed to give a penalty to Besiktas for Jack Wilshere's foul just as their player was about to break the back of the net. When we did score it was a bit scrappy as Jack miscontrolled the ball in to the path of Alexis. What the goal means could be an important part in the entire history of Arsenal.
When Alexis got the goal he puffed out his cheeks and raised his arms in the exact same way Dennis Bergkamp did after his classic volley to get off the mark. The way he played when they came out for the second half it was as though a weight had been lifted from him, just as it was with Dennis that day against Southampton. There was a freedom in the way he went about his business after half-time. I noted there was an occasion just before he scored where he had the ball and passed it square despite having the opportunity to beat a defender and be in on goal. When he was at Barcelona he would have taken that chance to go at his man. In the second half that was exactly what he started doing and we seemed to be looking at the sort of player you pay the big money for. The way Alexis put himself about for the team last night was incredible. He is tiny and yet he was too strong for men much bigger than himself. He was winning headers towards the end of the game that he had no right to get to. It was sheer desire and will to win from a player who looked like he suddenly felt at home. The crowd reacted to him and so did the rest of the Arsenal players. If Sanchez last night gave us a sign of things to come from him then we will certainly never be faulting him for a lack of effort. As I say, it could be a big moment in our history if he can replicate even half of what Dennis achieved. I could, of course, go in to one at this point about the contrast with Mesut Ozil, but I've said it all before about him.
The other player who truly stood out for me last night (aside from the back four - Nacho Monreal had his best game in an Arsenal shirt) was Santi Cazorla. There are often times when Santi flits in and out, or is almost totally invisible. Last night he was everywhere. I've never seen him putting in tackles like he did against Besiktas. When he got the ball he looked dangerous and got us on the front foot straight away. In its own way it was probably his best performance since he joined Arsenal. I wonder if Santi has sensed an opportunity here with Ozil stuffed out on the left. Suddenly Wenger is trusting Cazorla with the important role and he certainly went to it. I can't speak highly enough of what I saw from Santi Cazorla in that game and it was crucial to us qualifying for the Champions League. I thought throughout last season that Cazorla would be gone by now - he is now looking to make himself the key player.
As with the chance to criticise Ozil I could now launch an attack on Arsene Wenger for his comments about new players after the game but you've heard it all before. And it will keep until next week when the transfer window closes and we know whether or not he has been too tight to launch a challenge for the Premier League this season.

The draw, as I'm sure you've seen, has been made already for the Champions League. I would say I'm not too upset with it, though it could obviously have been a bit easier. Borussia Dortmund are drawn with us for the third year in succession and this is probably the weakest side they've had in that time. Losing Lewandowski was huge for them (though you can be fairly certain that Reus won't be joining us before Monday now that we've drawn Dortmund again). That's not to say it's going to be easy - they are clearly the main threat to Arsenal in the group once again. Starting our campaign at the Westfalenstadion is not good at all, but nor is the prospect of going to Galatasaray for game six and needing to get a result to qualify. That being the case you would have to think the four games in between must garner maximum points if we are to make it through this time.
The draw against Galatasaray had to happen at some point I suppose. Having been in Copenhagen fourteen years ago their supporters are people I had hoped never to encounter again. Sadly we now have them to face in a competitive fixture. I suspect a lot of "veterans" will be in and around North London when we play them, and probably a few from Leeds will join them. In truth, it is the violence of their support that makes them even remotely a worry on the pitch. This is a team for whom Emmanuel Eboue is a key player. Say no more about their quality. It beggars belief that their fans are still allowed to get away with the "welcome to hell" nonsense, but that's UEFA and their failings all over. Hopefully the players are able to concentrate simply on doing the business on the pitch, and nothing would give me more pleasure in this group than to destroy Galatasaray - anyone who was at that UEFA Cup Final in 2000 would no doubt agree.
The tie I'm most looking forward to is Anderlecht. They are a famous adversary from Arsenal's past after what became the Double team beat them in the Fairs Cup Final 2nd leg at Highbury in 1970. People who were there that night tell you that Highbury was never better than for that game. Us youngsters probably go for 1998 as our best memory (certainly it's mine) but for the previous generation Anderlecht is a name synonymous with their favourite time at the old place. With the fixtures announced there is only one game that I am working for in the group stage, and that is Anderlecht away. However, it's been a while since I went away in Europe, and Belgium is no distance from here so I am booking a day off and going to that one. It's the third group game so there will be plenty riding on it. I'm looking forward to it already.
The best thing about the European draw for Arsenal is the relative lack of travelling. Dennis Bergkamp would have played in two of the three away games, for God's sake. That's good for the players and it's good for the fans who will once again follow over land and sea (and Leicester on Sunday) in their thousands - though maybe not quite so many will go to Istanbul. The important bit from last night is that we're in a position to even think about these matches, and we can thank Alexis for that.
Posted by DvbrisG at Thursday, August 28, 2014