It all begins again for Arsenal wtih new signings, A new initiative for this site 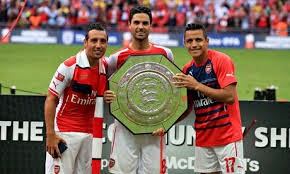 More of this please boys

Crystal Palace have caused the big story of the first weekend of the Premier League season, regardless of what happens tomorrow. The business of Pulis leaving certainly seemed to come out of nowhere. I watched Match Of The Day on Sunday night and he seemed dead keen to be getting on with things and very much looking forward to what he described as the "honour" of playing away at Arsenal on the opening day. I know a couple of Palace fans from work and they are utterly shocked at losing Pulis and wondering where this leaves their team. None of us know what has really gone wrong, and you'd have to think Pulis might have been given a blank cheque after what he achieved last season. The only thing to counter that is a stat I read last night which showed Stoke City, in his final three years there, had a net spend of £90m which put them behind only Man City, Chelsea and Man Utd in terms of transfer fees paid. Maybe Steve Parish wasn't willing to go along with that sort of thing and is looking after his club and its long term future. I like Palace and I hope this doesn't have them heading through the Premier League trap door come May.
For Arsenal the goings on at Selhurst Park could either be a bonus that allows us a comfortable win, or the sort of mayhem that sees players putting it in on behalf of the former manager. We go in to it with the confidence of being the side that has the FA Cup on the sideboard (the trophy will not be paraded tomorrow as it might have been in the old days as the FA have taken it to some non-league outpost for the launch of the extra preliminary round - sod the fans of the team that actually won it!) We also have the confidence of stuffing the Champions at Wembley last weekend. And then there are the new arrivals who will have the crowd right up for it before kick-off. Alexis Sanchez will no doubt get the biggest cheer and it would be great if he could get off to the ideal start and grab a goal or two in his first proper home game.
I remain concerned at the fact we remain short in certain areas, as I wrote yesterday. For tomorrow we have Laurent Koscielny in the side, but I worry he is playing half-fit with an achilles knock that could end up troubling him for months. Not having signed a centre-back to replace Thomas Vermaelen, when you've admitted that you knew he was going to leave before last season even finished, is indicative of the negligence we've seen become prevalent in recent years. It's great bringing in World Class attackers like Alexis that get the crowd going, but one or two more decent squad men are equally valuable when it comes to getting over the line come May. The decision to "protect" the German players (Mertesacker and Podolski needed a rest about as much as I did) might now backfire if it means Koscielny is being put at risk, as he surely is.
Mikel Arteta is now the official Captain of Arsenal. I was hoping we'd be bringing in someone to ease Arteta back in to the ranks this season but it looks unlikely with this appointment. What has disappointed me, however, is what seems to be a targeting of Arteta as the new boo-boy for the squad, at least from what I've seen written on the internet - the sort of stuff that has a habit of transmitting to the terraces for some reason. If there is one man who should never be a target for the fans (and nobody in an Arsenal shirt should ever be getting stick from their own on a match day) it is the Captain. Arteta is the leader and he deserves the support of the fans.
Sadly I won't be there tomorrow. This was the first time I'd ever wanted us to be away from home for the first game of the season as I am going on holiday in the morning. My first proper match this season will be the Champions League qualifier at home to Besiktas. I'll not be in a position to write anything for at least 9 days from here, and my main task tomorrow (assuming I've arrived at my destination in time) and for the away game in Turkey, will be to find a French TV channel showing Arsenal.

As regulars might know I already have a Twitter account for this website (@ARSENALDvbrisG) and there is a Facebook page you can "like" by looking up "It's MY Arsenal Opinion". The only thing missing from my social media empire is an Instagram account. Well not any more! The site is now on Instagram as well and can be followed @arsenaldvbrisg where I will be posting Arsenal photographs, often from the games themselves. Hopefully it will be another fun way to keep up with The Arsenal and for anyone interested to comment on anything and everything.

Nine months of Arsenal starts tomorrow. Come May I want us to be celebrating the Title. Until then it simply remains to say: