TV5: Thanks and good luck

The first time I saw Thomas Vermaelen play for Arsenal was at Barnet and I wasn't overly impressed. He spent the afternoon failing to win headers in the centre of the Arsenal defence and I noted that he lacked the height we might associate with a top centre-half. When he made his official debut at Everton a few weeks later he got on the score sheet in a thumping away win, making himself an instant crowd favourite. Plenty of goals would follow, most notably a cracker from outside the box against Wigan. When we were putting in a corner or a free-kick Thomas was flying in and attacking the ball. This was great. By the end of the season he'd been injured and had stopped attacking set-pieces. What the goals had masked, of course, was the fact that Vermaelen was merely okay as a defender. It was something that would become more and more apparent as his knack for scoring dried up.
I don't want to sound like I'm wise after the event, or even that I don't rate Thomas Vermaelen. I do rate him highly. When fit and firing Vermaelen had the drive and the effort to take on the best of them. The problem is that he wanted to wander off in to midfield far too often, leaving the rest of the defence exposed. He had a habit of diving in when he'd got the wrong side of his man - a trait that cost us two goals against Chelsea a couple of seasons back. I wrote a post early last year saying how he could have saved us a fortune by being moved in to the defensive midfield role occupied by Mikel Arteta. We'd have been making the most of Vermaelen's outstanding ability on the ball, while not worrying about him leaving a forward with a clear run on goal. I've been told that he was earmarked for the role at one point last season, only to get injured again before the game in question. That will always remain a shame.
It's been a tough couple of years for Vermaelen since taking over the captaincy. He was really the only man to replace Van Persie when he left and he was clearly a proud Arsenal Captain. It was Vermaelen who insisted on a club suit, something which made a welcome return last season, and he also re-introduced the practise of the team walking to the centre-spot and saluting all four sides of whichever ground they played on (though my brother also claims credit for that one). However, virtually since he took over the armband he hasn't been an automatic choice. Mertesacker and Koscielny very much cemented their partnership at Vermaelen's expense, and his injury record didn't help him. When he came in last season he didn't let us down, and the other players were keen to point out that he was a real skipper off the pitch. Mikel Arteta allowing Vermaelen to lift the FA Cup alone in May shows the respect he had from the squad.
Given that Vermaelen has played very little for Arsenal since early in 2013 I would say that £15m from Barcelona represents good business by Arsenal. Keeping a player from joining a rival by refusing a straight sale to Manchester United also shows that there are maybe a few more teeth at the top of Arsenal's off the field team. I wish Thomas Vermaelen all the very best at Barcelona. He always gave his best and wore his heart on his sleeve for the Arsenal cause. If I was picking a favourite Verminator moment it would be his last minute winner against Newcastle a few years back, running the length of the pitch to slam the ball in at the far post - that was the Vermaelen I'll always remember. 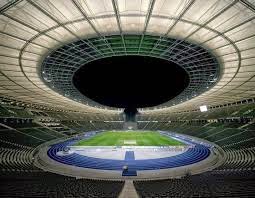 Berlin looks a long way off at the moment

The Champions League qualifier draw has not been kind to us. Besiktas and Atletic Bilbao were the sides I wanted to avoid so it's no surprise that we've drawn the Turks. If there is a positive then it's that we're away from home in the first leg. What I don't understand, however, is why Arsene Wenger is handicapping his own side by giving the German players an extended break.
Per Mertesacker is the key man in the Arsenal defence (and likely the new Arsenal Captain if Wenger can bring in a defensive midfield player). Mesut Ozil, regardless of what I think of him, is the focal point of the Arsenal attack and is crucial to the way we play we our game. Lukas Podolski, for all the critics he has, is the explosive goalscorer that can make a difference, especially when he's coming off the bench around quicker players. There is simply no valid reason for them to not be at Arsenal before Monday. It's bad enough that they won't be at Wembley on Sunday, but to be missing the start of the Premier League and, most likely, the away leg in Turkey is utterly ridiculous.
Of the three of them only Ozil played a full part in the World Cup. Mertesacker was left out after a couple of games, and Podolski was largely the main cheer leader on the subs bench. Added to this is the fact that Podolski didn't even play much for Arsenal last season. I'm sure he would admit that he has not needed the four week holiday Arsene Wenger has insisted on. And are these men not paid tens of thousands of pounds every week to actually play football?
Given how tough the draw is Wenger is taking a risk with our Champions League qualification this season. We don't need to be taking gambles with millions of pounds and the attraction that is the Champions League at stake. These days I think most people could take or leave the group stages, but you have to be in them to get through to the glamour ties. I'd far rather be on the inside the peeing out of the tent than watching it enviously from Thursday nights on Channel Five. If the gamble pays off then so be it, but the risk is a seriously big one.
Posted by DvbrisG at Friday, August 08, 2014