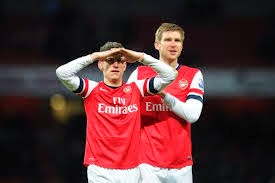 "Another centre-back? No, Per, I can't see one either"

I certainly didn't see Arsenal coming out of yesterday without the Emirates Cup in tow. Having won 5-1 on Saturday it was inconceivable that they wouldn't win the trophy after the matches on Sunday. Of course, but for Martin Atkinson and his clown of a linesman Arsenal would probably have got the goal yesterday to have rescued the result. Ultimately it doesn't matter as it's only a pre-season knock about, but maybe losing yesterday might have done us all a favour in terms of what it might have showed Arsene Wenger.
On Saturday Arsenal were all action and full of pace. I kept saying last season that we had no pace without Theo Walcott and Alex Oxlade-Chamberlain. A lot of that could have been offset if we moved the ball quicker and went forward properly. On Saturday, with Flamini directing the midfield from the back and the ball going forward at pace - Chamberlain and Campbell out wide, Ramsey and Rosicky in midfield, and Sanogo up front there was intent to go forward. It pains me to point out that Mikel Arteta came on after an hour of the game and Arsenal slowed to a halt. Perhaps the fact that he started the game and we had Giroud up front yesterday is no coincidence - we were being slowed down and we were using a centre-forward who is usually at his most effective when facing his own goal. Without Ramsey in the side to get up with Giroud, and Arteta slowing down the move whenever the ball goes near him, it was seemingly much more akin to the stuff we saw between January and late April last season. But all of this is not my main concern today.
Yesterday we lined up with Calum Chambers next to Laurent Koscielny for the first-half. They are likely to be paired together at Wembley on Sunday against Manchester City. However, after the interval Nacho Monreal spent most of the second-half at centre-back, with Ignasi Miquel at left-back. We knew a long time ago that Wenger doesn't rate Miquel as an Arsenal first-team player, but we now are  faced with the fact that he is actively considering playing Monreal as a make-shift centre-half whenever he deems it necessary. That is utter madness. Monreal is bad enough in his own position, but to consider playing him in the centre of defence is something akin to suicide on a football pitch. If Chambers and/or Koscielny are injured by Sunday (and even if they're not we are going to struggle) then I dread to think what the combined attacking forces of Man City will do to Arsenal.
Leaving aside the lack of centre-halves, we are still not looking likely to sign that top defensive midfield player. It's reasonably well acknowledged that Koscielny and the BFG are a very decent centre-back pairing (only Shearer and Hansen think otherwise) but they have little to protect them from in front. It says it all that my heart sinks whenever we play a decent side and Flamini isn't in the Arsenal team - and make no mistake, redoubtable energy aside, Flamini is nothing more than a decent back-up man. As I said in the post yesterday, we are still three major signings short of a Premier League winning side as far as I'm concerned - we need a centre-back, we need a top defensive midfield player, and we need a 25+ goals per season centre-forward.
For me, Mikel Arteta's performances at Wembley last season won us the FA Cup, but his race is run. The events of the weekend should have showed us once and for all that Arsenal must play at pace. Arteta does not lend himself to that game. The positivity and pace in the game on Saturday (until the hour mark when Arteta came on) was so good to watch, and so devastating for the opposition, that even Wenger must surely have noticed. There's much to be excited about, but money still needs to be spent if Arsenal are to step up this season.
Posted by DvbrisG at Monday, August 04, 2014