Giroud's injury is bad luck - the result is not 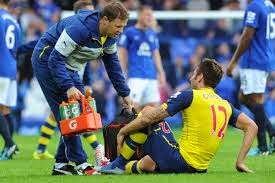 So Lukas Podolski has been given a stay of execution as an Arsenal player. Arsene Wenger can make claims about Podolski being in his plans and all that sort of rubbish but the fact is that he was on his way out of Arsenal until yesterday afternoon when they realised that Giroud was properly crocked. For tomorrow night it means that Poldi is "in the squad" and that could yet be very important for Arsenal's Champions League participation this season. I'll write a preview of the Besiktas game before I leave for the match tomorrow.
The way Olivier Giroud got injured was typical of Arsenal's poor fortune. There really was nothing in it, was there? It was just one of those freak things that could see the same incident a million times and no such injury would be suffered. Having just scored a fine goal to salvage a point it must come as a massive blow to Giroud. It's certainly a massive blow to Arsenal. However you rate Giroud we have to accept that he is currently our best centre-forward and the most likely player (perhaps aside from Ramsey) to score us a goal or two. And I suppose that's the biggest problem.
We all know that when push comes to shove Olivier Giroud is a good player, but he's not a top player. He is a 20 goals a season man, but if you're going to win the Premier League you need someone who is really the next level up these days. We've known this since Giroud made his debut and missed a sitter against Sunderland. He continues to miss the one chance that is likely to come his way in the big matches. Every striker misses chances, of course, but when it matters the best centre-forwards are the ones that make the difference against the other top sides. Giroud has consistently been found wanting in this regard.
I like Giroud a lot, and having him as the bloke on the bench and playing some games against the lower opposition would be ideal. So, for all that we are extremely unlucky that Giroud is injured, he should never have been anything other than the back-up option in the first place. As I say, we've known this about him from the off. Last year Wenger went after Higuain and Luis Suarez. He showed by trying to sign one of them that he also knows Giroud isn't the man. So why are we still waiting over twelve months later? Why are we in a position where Alex Oxlade-Chamberlain is being forced to sit in front of the press and extol the virtues of a player who has never scored a goal in a proper fixture? Why are we in a position where Wenger is having to eat humble pie and bring back a player in Podolski whom he had ostracised less than a week ago? Why are we in a position where we are going in to a crucial Champions League qualifying tie without the two main goal scorers in the squad, and not a single person who could be considered as adequate to replace them?
At the end of last season we knew we needed a new goalkeeper, a new right-back, a replacement for Thomas Vermaelen, a strong and powerful (not necessarily the much fabled defensive) midfield player, and a World Class centre-forward. As I write we have got the new goalkeeper, the new right-back and a kid who is filling in at centre-half. At the same time we've brought in a very exciting attacking player (not a centre-forward) and ignored the chance to sign one of the best midfield players in the World at a knock down price. One man is responsible for presiding over this shambles. It's no coincidence that when Wenger was away in Brazil we got business done. Either side of his time at the World Cup he's pulled the plug on a deal for Jackson Martinez over wages, and who knows what other deals he's destroyed because of his obsession with parsimony. Today he dismissed talk of doing transfer business because of the game tomorrow. Liverpool signed a bloke yesterday two hours before a match for the simple reason that for their transfer business, once a player has been identified, the Manager has nothing to do with the deal. That is not the case at Arsenal and it continues to hamper our progress after all these years. That is why our situation going in to tomorrow has little to do with luck.
Posted by DvbrisG at Tuesday, August 26, 2014