Nice silverware to get us going - how about a signing? 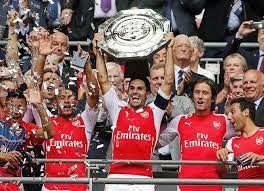 Mikel gets his moment as the Arsenal Captain


I wasn't at Wembley yesterday. My job requires me to work a certain number of weekend hours in any year and I wasn't prepared to give up any more of them at this stage of the annual cycle in order to go to another pre-season game. In hindsight, following a 3-0 spanking of Manchester City, I wish I'd gone now. As it was my eldest had a great time and saw Arsenal win at Wembley for the third time in a few months.
I've seen the extended highlights and talked to the family who were there and it seems Arsenal were outstanding in the first-half, and dug in to do enough in the second-half. Given that the half-time substitutions saw two full-backs paired in the middle of our defence I think we can all be quite happy with that. To see Arsenal countering with pace as they did is extremely encouraging and I hope it is a sign of how we are going to look to play our football this season. The second Arsenal goal was a case in point and it showed how Alexis can be key in turning defence to attack in the blink of an eye. I really hope he will be bringing out the best in Mesut Ozil, something we've really seen very little of.
The Charity Shield (it will always be that to me) is nice to win, but not overly important if you lose. It should be remembered that, until Sky got their grubby mitts on the live coverage in 1993, the Shield was shared in the event of a draw. The introduction of penalties meant that Sky were suddenly telling us it was a "major trophy" which it so obviously is not. In fairness Arsenal now also list it as a competitive fixture rather than a friendly and I feel that's not right. Having said all of that I would far rather see the Arsenal players cavorting about with a trophy in their hands than trudging off the pitch at Wembley looking down in the mouth before we've even begun. Any silverware is nice silverware, and the sort you win at Wembley is not really to be sniffed at. What I am not having is that Man City's team was so weak as for Arsenal's win to be dismissed completely. Let's not forget that Arsenal were without three World Cup winning players and Theo Walcott yesterday. City were no worse off than Arsenal - their boss chose to not to play the likes of Sagna and co, and we keep being told how strong their squad is, do we not? Perhaps they're not quite as strong in some areas as the media would have you believe.
For all that it was only a friendly (and Arsene's use of substitutes at half-time showed that was how he viewed it) I think we learnt one or two things from yesterday. Firstly it is clear that Arsene Wenger is willing to go with Calum Chambers as a centre-back for the time being, and the lad seems to have done pretty well yesterday. We also learnt that Mikel Arteta is now the Arsenal Captain. While congratulating Arteta on his appointment (and it was great for him to have his Wembley moment after passing the lifting of the FA Cup to Thomas Vermaelen back in May) it disturbs me that this looks to mean like a top midfielder will not be coming in. We all know Arteta is a hard working player who has adapted well to the position he has been playing, but when it comes to those big powerful midfielders we come up against in the top games he is found wanting in front of the defence. The final thing I learnt from yesterday is that, despite words to the contrary, it looks like Arsene Wenger doesn't truly rate or want Joel Campbell. To bring him on for four minutes was a bit of an insult really. What did Wenger learn from Tomas Rosicky getting a bigger run out at Wembley? That being the case I would not now be surprised if Joel did leave Arsenal after all, and that would make me a bit sad. I've seen a photo of Campbell looking a bit forlorn, stood on his own with his medal at Wembley. The boy deserves a proper go at Arsenal and it will be a real shame if he is passed over while people like Sanogo, and veterans like Rosicky, are getting more game time than him.
So over all it's been a very short pre-season in terms of games played. The German players are only just back in training and won't be playing for a week or two. I would imagine that the hard work will be wound back on the training ground this week ahead of a busy couple of weeks of matches for the side. Come Saturday I don't expect to see a vastly different team to that which started yesterday (though I'm worried by the news of an achilles injury to Laurent Koscielny - that is something that could de-rail our season before we've even got started as there's no such thing as a minor injury in that area). I suppose it just makes the need to sign a very good centre-half all the more urgent.

I'll be writing the annual Premier League season preview piece over the next couple of days and will upload it to the site on either Wednesday or Thursday evening. I'll then follow that on Friday night with a preview of the Crystal Palace game. There will also be news of a new dimension to the site on social media. Check back for all of that in the week.
Posted by DvbrisG at Monday, August 11, 2014