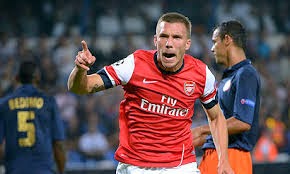 On his way out of Arsenal

I've been away on holiday for a week so I've seen only the extended the highlights from Arsenal's matches so far. I was delighted with the late win at home to Palace and the point gained at Everton - you'd almost always take a draw from Goodison Park. As a result of all that I'm really looking forward to getting back to Arsenal on Wednesday night for the Besiktas second leg. Or at least I was...
With Sanogo injured (and who shouldn't be near the Arsenal first team in any case) the fact that Lukas Podolski wasn't even on the bench at Everton tells you that the German is about to leave. Poldi was actually in Cologne on Saturday, and his social media output regarding Arsenal has become just about non-existent, telling me for certain that Arsene Wenger has told him his time with us is up. After all, who needs a player that can score goals? Wenger told us last season how Podolski is the best finisher in the Club (okay, there's not a lot of competition on that front, but even so) but then proceeded to not use him as a strike partner for Giroud when we were trailing at Wembley. The fact is that Wenger never seems to have truly rated Podolski. That is something that utterly sickens me as an Arsenal supporter. Now, just when it seems we need Podolski more than ever, he looks set to go to Juventus on loan (I'll deal with that below).
On Wednesday night we are playing a game that is crucial to our season. Not being in the Champions League will cut off the money that should be available to the Manager - without the guarantee of the TV money Arsenal will ring-fence the available cash pending another failure to get there next season, I am sure. More to the point we are going in to Wednesday needing to score two goals (one will not be enough with our defence) and we have an injured Giroud (forget Sanogo). Saturday should have proved to anyone that the idea of playing Alexis as the lone striker is ridiculous - Wenger says the Chilean lacks confidence, but that's not really any wonder when you're putting him up against two giant centre-backs on his own! In fairness, when Podolski has been the lone striker it hasn't been overly successful for the most part. However, in the absence of the others and the fact that Wenger doesn't seem to really rate Joel Campbell - who played as a lone striker throughout the World Cup - Podolski should be the man playing on Wednesday. Instead of that he won't even be in the country by the look of it. If Arsenal don't have a fit goal scorer on Wednesday night, and we go out of the Champions League, then Arsene Wenger should be utterly ashamed that he has failed to make use of a World Class finisher in the shape of Lukas Podolski.
At the moment it looks like Podolski will be going on loan, as I said above. What exactly is the point in that? If he is going to go then he should be sold so that we can make back the transfer fee we paid. If Juventus, or anyone else, aren't willing to part with the cash that would buy Poldi then he should remain at Arsenal and be used properly by the Manager for the first time since he arrived at the Club. If he does go, then a new striker has to be brought in (we needed one in any case - a genuinely World Class, 30 goals a season centre-forward). The time is running out to sign players, and not winning on Wednesday would leave us with another very long nine months ahead.
Posted by DvbrisG at Monday, August 25, 2014