Ozil still looks more like a problem than the solution, PUMA and Boreham Wood 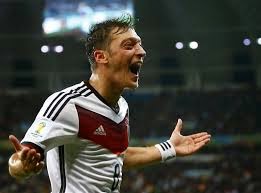 What is wrong with him?

I think most Arsenal fans would have watched the World Cup matches yesterday with increased interest. We had Giroud and Koscielny involved for France, and Mertesacker and Ozil for Germany. It would be fair to say the two central defenders were the more impressive performers, despite what Andy Townsend would have the ITV viewers believe.
The worrying thing for me is that Mesut Ozil looks as uncomfortable in the German side as he has at Arsenal since November. What we are watching is not the player who arrived in September. His debut at Sunderland, and the home games with Norwich and Napoli seem a lifetime ago. Something is wrong with Mesut Ozil and Arsene Wenger needs to work out how to put him right. It was noticeable throughout the last hour of the game last night that Germany's players had no intention of giving him the ball if they could possibly help it. If you thought Arshavin had some lazy touches then Ozil last night was comatose at times.
It's an inconvenient truth to many Arsenal supporters, but he looks like a £40m pup at the moment. Some, who clearly consider themselves some kind of football intellectuals, still claim that people like me simply can't see what he brings to the side. They're right, I suppose, because I can't see what he brings. The occasional pass that makes you gasp (there was one last night early in the second-half that sent Schurrle clear) is really not enough. When he gives it away he simply shrugs his shoulders and doesn't react. On one occasion last night he was sent clear and looked set to score, with the ball on his left foot, only to try and turn inside (lazily) and run in to the nearest defender. It's so disappointing, yet he looks totally disinterested.
I read one of the more popular blogs this morning where Arsenal fans were mocked for being angry about Ozil's performance for a side we care nothing for. The point is that his display (and his performances throughout this tournament) are simply redolent of what we've seen all through the last six months. I hate to keep bringing up Cesc Fabregas, but if he starts doing the business for Chelsea while Ozil plays in this fashion at Arsenal then he will not only be a £40m pup, but the most expensive boo-boy in World football.
I said yesterday that Arsenal need to bring in forwards that play to Ozil's strengths. It's noticeable that he is not trusted enough by Joachim Low to play through the centre (you can be sure that a fit Reus would see him on the bench). But what he has got is players who play the way he likes. Yet still he seems incapable of producing the goods. That's a worrying development for Arsenal.

The dark years of Nike are over. Arsenal officially announced the commencement of their deal with PUMA at midnight last night. Nike produced some very good Arsenal shirts in their 19 year association with Arsenal, but also just about all of the biggest stinkers we've ever had. PUMA are starting on the right foot with a lovely looking red shirt with white sleeves, and a traditional yellow and blue away kit. The third shirt isn't to my taste, but I don't see the team wearing it more than once or twice (and that will only be in order to satisfy the terms of the sponsorship). I'm not going to post any of the leaked pictures of the shirts as their available on hundreds of websites with a simple Google search. I will, however, complain about the fact that Arsenal didn't go through with officially unveiling them last night and making them available to pre-order for delivery on the launch date. But what do I know about business, eh?

While we're talking business, Boreham Wood FC are making the most of the visit of the Arsenal first-team (those that aren't/haven't been in Brazil) that was announced yesterday. The ticket prices are nothing short of a joke. How can they possibly justify £18 to stand, £14 concessions and £24 to sit? Given that you can get Charity Shield tickets to watch Arsenal play Manchester City at Wembley for just £20 you'd have to wonder how they're getting away with that. I might still go to the game, if only to get some Arsenal action and a proper look at the new kit, but it'll cost me £32 for me and my boy. That's an outrageous cost to see a game like this one.
Posted by DvbrisG at Tuesday, July 01, 2014