Alexis Sanchez underlines Arsenal's ambition, Not all positive (or negative) at kit launch 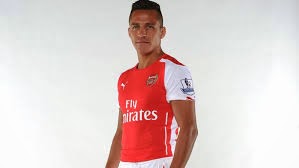 Now we can go forward

I was one of many who felt the signing of Mesut Ozil was a massive money signing virtually forced on Arsene Wenger after the Aston Villa debacle last August. The signing of Alexis Sanchez shows that we were probably (and thankfully) wrong. To go out and splash around £35m so soon after the signing of Ozil shows that Arsenal are now back in the big time. With a large chunk of the transfer fee actually paid for by selling rights to Carlos Vela, and Chelsea's signing of Cesc Fabregas, this looks like exceptional business by Ivan Gazidis and his team. Alexis Sanchez is a World Class player. There isn't a side anywhere in the World game that can have too many of those.
I am actually even more excited by signing Sanchez than I was by Ozil. He was superb for Barcelona in the last two years (particularly last season) and he lit up the World Cup in an entertaining Chile side. Off the back of any World Cup (or European Championship) there are always a few players who everyone takes notice of and would like to see in their team. Andrey Arshavin was one such player and Alexis Sanchez is most definitely another. This is a statement from Arsenal that they intend to be in the mix from now on. We will be bringing in the big names. We will be fighting off competition from other big football clubs like Liverpool and Juventus. I can only congratulate Arsene Wenger and co on giving us a player like Alexis. Wow is all I can say.
The reaction of the other Arsenal players via Twitter showed that they are as excited as us fans. I still think that at least one of them will be heading out of the door as a result of his arrival, though I'm now somewhat reassured that it won't be Santi Cazorla (more on him below). I fear that Lukas Podolski will be the fall-guy and that upsets me as I'm a fully paid member of the Poldi fan club. Sanchez is the sort of player who can bring the best from Podolski and, as with World Class players, you can never have enough goal scorers.
If you look at Arsenal's list of attacking players we now have Ozil, Sanchez, Podolski, Giroud, Walcott, Chamberlain, Gnabry, Cazorla, Ramsey, Campbell, Sanogo and Ryo. The last three of them will find their opportunities ranging from limited to non-existent, so I expect at least two of them to either leave or go on loan. But when you look at the others, with Wilshere, Arteta, Flamini, Diaby (hopefully) and maybe at least one more signing backing them up from midfield you can see that there are reasons now to be genuinely excited going in to the new season. New signings should give you a buzz. Alexis Sanchez has done exactly that. I can't wait to see him play. 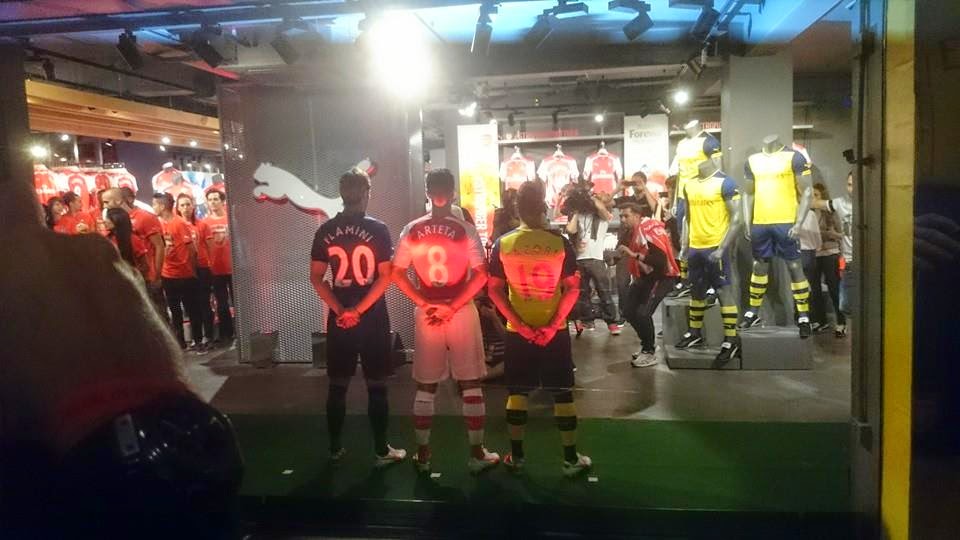 If you read yesterday's post you will know that I went to Carnaby Street last night for the kit launch. It's fair to say it wasn't quite what we were all hoping for or expecting. What none of us knew was that there was a VIP event before ours where there was a Q&A with Flamini, Arteta and Cazorla. Among those invited to that event were some of the journalists who spend all their time slagging Arsenal, "celebrity" hangers-on like Jim Rosenthal's son (who claims to be a comedian) and people from, shall we call them "friendly"?, Arsenal blogs - i.e. the ones that are featured on the Arsenal website and never dare to criticise in any way. Now I have no desire to have my writing censored by Arsenal, but it annoys me that these people are given access in such a way as they actually attend very few games. Those of us that do go and watch Arsenal were all left outside the PUMA store waiting for the launch to happen.
When the clock ticked over to the appointed time we were treated to a very good video featuring Arsene Wenger and the new kits (this was projected on to a water screen at the London Eye for the VIP guests) before the tarpaulin covering the shop window fell to reveal three very familiar looking "mannequins". I had been told before hand that they were the real thing, but some were utterly convinced that we were looking at waxworks of Flamini, Arteta and Cazorla (the first two were very convincing as it happens). Santi couldn't help himself when I started singing his song (and everyone joined in) and he started to giggle. This set off the other two and the fans applauded the three players. What happened next was annoying.
Before any of us great unwashed types were allowed in to the shop the three players were ushered out the back door. Would it really have done any harm for Arsenal to have them sign a few autographs or pose for some photos? To say it was an anti-climax is a bit of an understatement. We then had to wait to be allowed in as very few people were being let in to the shop at any time - Keith made it clear to the steward that we were next after about ten minutes of this and our barrier was removed to let us in.
Having got in to the store I have to say that I love the kit. The red shirt with white sleeves looks great, while the yellow and blue away shirt is a triumph. The blue third kit, however, is not yet on sale and I find that odd - it also looks better in the flesh than it did on the leaked photos.
I also don't understand why the Arsenal crest is not embroidered on the shirt as the PUMA logo is. Maybe that's a small concern. A lot of the PUMA stuff looks very good, but doesn't necessarily feel the highest quality - the waterproof jackets are a prime example of what I'm saying here.
The absolute worst thing about last night, however, was that anyone buying the shirt was being ripped off by PUMA. The cost of the shirt (which wasn't available in all sizes) was £55. I declined to buy mine as I knew Arsenal were selling it at £50. Sports Direct are knocking them out at £45. It disturbs me that Arsenal have allowed the launch event to be done in their name, while their invited fans were being over charged to buy the kit. It all left a bit of a sour taste.
Having said all that I have to say that Arsenal got their marketing spot on last night. The announcement of the new signing was quickly followed by the news of the squad number he will wear (a bit of a harsh one on Nacho Monreal) meaning that they can immediately reap the revenues of shirt printing. This is something that they've failed to do in recent years by not allocating a squad number straight away. Hopefully the penny (or the thousands of pounds) is beginning to drop. Some people have accused the Club of being cynical with the Sanchez announcement just hours before the kit launch. I call it smart. 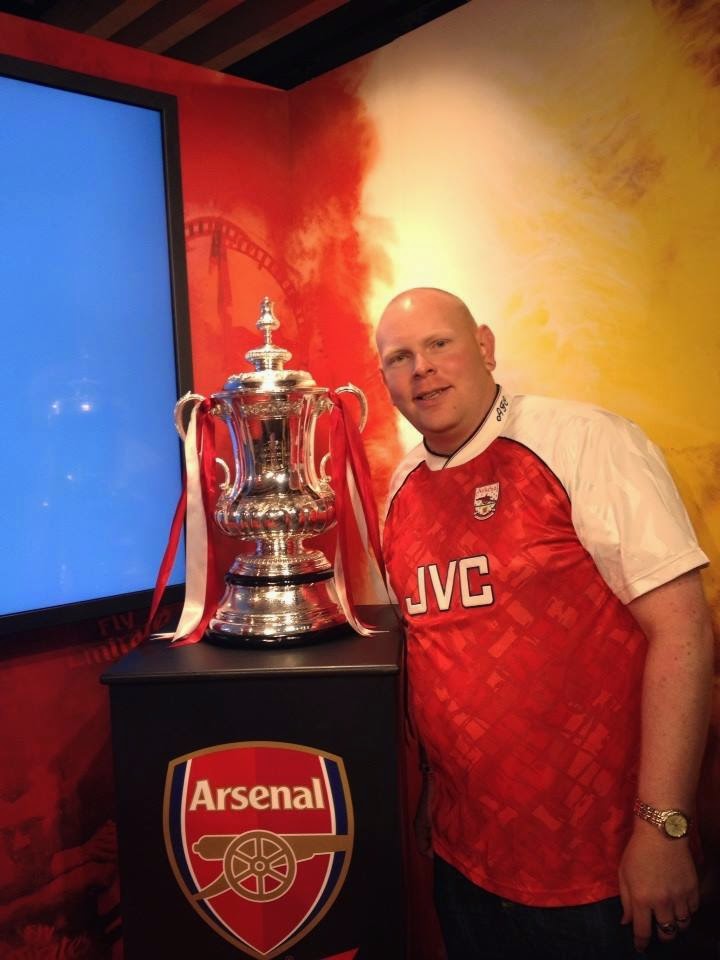 Fat bloke with the FA Cup

All was not lost on the night, despite not yet buying the new shirt. At the back of the store was the most beautiful trophy in football and you could line up to have your picture taken with it. I can never have enough photos of me with the FA Cup and I couldn't miss out last night. I'll ignore being told "don't touch the trophy" - what exactly do they think we're going to do to it after the players chucked it all round Wembley two months ago? - and just let you know that I never tire of seeing it decked out in its Arsenal ribbons. I hope to see it a few more times in the flesh before Arsenal hand it back next year.
Posted by DvbrisG at Friday, July 11, 2014