New kit launch tonight - will we see anybody new? - I'll be doing updates 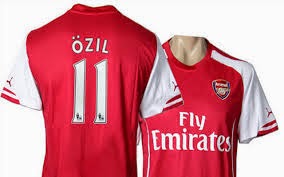 Thanks to a stroke of good fortune I've secured a late invite to the Arsenal kit launch in the PUMA store on Carnaby Street tonight. We all know what the kit looks like but there's still a buzz of excitement when the new shirts go on sale. I expect PUMA and Arsenal to unveil all three new strips, though I'm not sure if they're all available to buy straight away.
Earlier in the week there was much speculation that the event might be used to unveil some new players. We all know that Debuchy and Alexis Sanchez are just about nailed on to sign on the dotted line at Arsenal. That being the case I wouldn't be overly surprised to see one, or both, of the men at the launch tonight. One of Arsenal's media men Tweeted the other day about an "audacious stunt" from the Club but there's been no more speculation as to what that might be - you will remember that last year it meant one of the stadium cores was replaced with pictures of the young British Arsenal players in the new yellow shirt.
Arsenal have already announced that Ramsey, Walcott and Jenkinson are going to be at the re-opening of The Armoury tomorrow morning, so I don't expect any of those three to be on Carnaby Street tonight. The Manager is still in Brazil, but there is no way that the kit will be unveiled without the presence of someone from the first-team. If I had to put money on it I'd say Arteta will be one of the men donning the new apparel tonight.
The launch is apparently live on the internet (it begins at 11pm) but I don't know if it's on Arsenal Player or just via the PUMA website. PUMA have already been running some videos advertising the launch so I reckon that's your best bet if you want to watch the proceedings later on. If it is live on Arsenal Player there will no doubt be an announcement at some point this afternoon. Alternatively you can just follow me on Twitter, @ARSENALDvbrisG, as I am hoping to provide some live updates from the venue as the evening progresses. You never know, there might even be a photograph of Alexis Sanchez (or maybe not).