My copy of the Arsenal Season Review DVD arrived in the post on Saturday morning and I got around to watching it today. Having done so I am absolutely fuming at the rubbish that has filled what should have been a great watch. The film goes on for two and a half hours, but if you can get through the first fifteen minutes without getting dizzy you've done well. If you do survive that then you'll simply get more and more annoyed at the content of the DVD.
Last year Arsenal produced the usual end of season DVD using their own in-house media department. What they ended up with was a bizarre review of the season incorporating bad camera angles, worse operation of said cameras, a bad script delivered by a poor narrator and an oppressive musical soundtrack that either played over the top of, or not too far in the background of, almost all the football. Having bought it last year and been amazed at how bad it was (and I wasn't the only one) I felt sure they wouldn't make the same errors this year. As you will have guessed from the tone of this piece that is exactly what they've done. Put together with the amateurish commentary from the bloke on Arsenal Player you really do end up with a headache from watching it.
The film of the Arsenal goals is quite unbelievable. Do you remember that brilliant volley by Aaron Ramsey at Sunderland? I hope you do, because the film used on the DVD means you don't actually see Ramsey hitting the ball. Then there is Jack Wilshere's goal against Norwich, the BBC Goal Of The Season winner. On the Arsenal DVD we get to see the last four passes in the build-up, rather than the ball being won on the edge of our own penalty area and worked up the pitch in the move of the decade. How about the pass from Ozil for Flamini's goal at Cardiff? No, that's not there. Nor is the reaction of the Cardiff fans to Aaron Ramsey's goals in that game (both of which are shown from angles that don't let you appreciate their quality) which was surely one of the stories of Arsenal's season. As a viewer you find yourself rushed through the good wins mentioned so far, only to then get hit with full highlights of the 6-3 defeat at Manchester City and the 5-1 hammering at Liverpool. We even get the full works from the 2-0 home defeat to Bayern Munich, but not Fabianski's penalty save in the return leg.
As you move towards the business end of things you get the distinct impression that the DVD has not been made by anybody with the remotest idea about football or Arsenal. The FA Cup semi-final is again rushed through, with the dodgy camera angles and hideous music, and we see Wigan's two penalty misses and Cazorla's winning spot-kick. I had been looking forward to viewing that whole penalty shootout, and hearing the Arsenal fans (all 50,000+ of us at Wembley that day) reaction to the win. I was left wondering if we had won the semi-final after all such was the way it was glossed over. 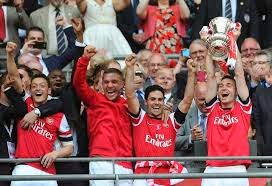 You won't see this on the DVD

Worst of all is the FA Cup Final coverage. We get all the goals, but only one of the penalties that wasn't given. We actually see less of the Cup Final than we do of the defeats I've detailed above. And then we have the coup de grace as the presentation of the FA Cup to Thomas Vermaelen, and his lifting it to the supporters, is not shown at all. The most important moment at Arsenal in nearly 10 years and it isn't recorded for posterity in the official Club archive. I rewound the disc to check that I hadn't missed it. The most iconic part of any FA Cup win is the trophy been lifted, and yet whichever cretin has produced, edited and signed-off on this film has allowed it to be published without showing it to us!
The whole DVD gives me the impression that it's been designed by some arty student type who thinks they're being incredibly clever. It looks like a bad FIFA official World Cup film. When I've written to Arsenal in the past to complain about their publications I have been told that they have a "stringent" quality control process. Given the errors that are prevalent in written publications, and the utter dross that has been produced on official DVD's these past two years, it is clear that Arsenal Media needs a massive overhaul. Maybe they should start by actually employing people who know football and who love Arsenal.
Posted by DvbrisG at Monday, July 07, 2014