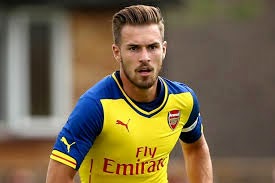 I spent all of last week in Liverpool for a training course. There were three highlights that I'd like to share. Firstly, the two blokes I went up there with had never been to Anfield so I took them to see the Hillsborough Memorial and the Shankly Gates and The Kop. What awaited us at the back of The Kop was pure comedy gold as a 40-feet high picture of Luis Suarez smiled down on us (those teeth are genuinely threatening when that over sized) in an advertisement for Liverpool's new kit. Secondly, having driven round the corner to Goodison Park we were confronted with the sight of a local taking the wheels off a car - we didn't ask if it was his own car. Finally, next door to the official Liverpool shop in the Liverpool One shopping complex is another official football retailer called Everton Two. Genius.
Having been away all week I wasn't in a position to comment on the reflected happiness of Arsenal having three players in their squad who will be waving World Cup winners medals at the press next season. That Per Mertesacker, eh Alan Hansen? I bet him coming on to play in a World Cup Final had old Hansen picking feverishly at his scarred forehead - nobody is going to miss that particular dinosaur of punditry as Rio Ferdinand and Thierry Henry delivered a master class in the art during the tournament.
The other thing I missed, of course, was the signing of Mathieu Debuchy. It may have been a bit mundane after bringing in Alexis Sanchez the previous week, but I welcome Debuchy nonetheless. However, he is going to have to do a lot to impress me. I was a huge fan of Sagna and I am a huge fan of Carl Jenkinson. I actually would have rather we saved the £10m or so (a little over the top for my liking) and used it more wisely elsewhere on the squad and given The Corporal his opportunity at right-back with Bellerin as his understudy. Debuchy looked an awful player when we played Newcastle late last season with Lukas Podoslki ripping him apart that night. Debuchy appeared slow, lacking in commitment and constantly out of position. As auditions for Arsenal go that wasn't a great one. He did little in the World Cup to get me to understand why he gets in ahead of Sagna for France. I am concerned by Mathieu Debuchy, but any new signing starts with a clean slate and we'll see how it pans out. I sincerely hope that talk of Jenkinson being sent away is merely just that - I can see him in the side by Christmas on his own merits.
I didn't go to Boreham Wood on Saturday as I was never going to pay £18 to stand and watch what was always going to be mostly a reserve side. I watched the game on Arsenal Player and there were one or two who stood out. Yaya Sanogo was not among them and still looks as far away from a Premier League player as Kaba Diawara. Yes, it was the first game of pre-season and it means absolutely nothing, but compare his first-touch with what we saw from Joel Campbell out in Brazil. Even better, compare him with Chuba Akpom who came on and once again looked the business, albeit against part-time opponents on a hot day. Akpom was the stand out youngster last Summer, alongside Zelalem (who also got another chance on Saturday and will in New York along with Akpom this weekend), and he surely should be ahead of Sanogo in the pecking order. Arsenal's first goal was a joy, of course, with Tomas Rosicky playing a top class ball through to Kris Olsson who applied the finish. It was nice to see TR7 getting in to the groove nice and early in the piece. We'll know a little more about the progress of the players in New York on Saturday night, and I wouldn't be surprised if a certain Mr T Henry was to pull on a number 14 Arsenal shirt at some point, assuming the referee isn't a jobsworth killjoy like Martin Atkinson was a couple of years back.
There was one other important thing that happened on Saturday and that was the naming of Aaron Ramsey as Arsenal Captain for the day. The Club has made a big thing of it since, and so has Rambo himself. We know Vermaelen is going (and shouldn't be Captain even if he was to stay) and the whispers are not dying down regarding Mikel Arteta (I would be utterly shocked if he left Arsenal this year). That all being the case I think most of us would expect (and not be disappointed if it happened) Per Mertesacker to be the new skipper. However, I would not be averse to Aaron Ramsey being made Arsenal Captain from now on. Would it not be a good thing to make him feel as important as we possibly could by building the team around a midfield general of real class? Make no mistake, Real Madrid and Barcelona will be all over him this time next year if he has another top season, so let's strike early Arsene and show the Boyo that his future is Arsenal Football Club.
Posted by DvbrisG at Monday, July 21, 2014