Wenger locks the fans out 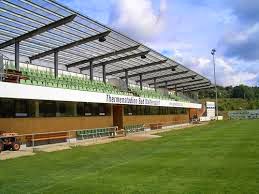 The seats remained empty this morning

As I told you yesterday I have family out at the pre-season training camp in Austria for the week. Last night they went off to the airport to meet the players off the plane, hence the post from late last evening with the names of those that were seen. Having got a few shirts and pictures signed it made for a fine start to the week. However, what has happened since is leaving the travelling Arsenal supporters (from across Europe) more than a little annoyed.
One of the features of the pre-season training camps at Bad Waltersdorf has been that the fans have been able to watch the training from the stand which runs the length of one side of the ground. It was a shock to those present to find out that the session this morning was to be held behind closed doors. Plenty of them still turned up and waited for the players after training in the hope of getting some photos and signatures, but that's as close as they were allowed (the players entrance is caged off all the way to the door of the waiting coach).
What annoys most is that the people that have always travelled to Austria have watched tours to the far east, and now America, promoted with "fan events" that have allowed people access to the Arsenal team. So what's the difference now Arsenal are back in Europe? It seems that Arsenal know there is one group of supporters that they can treat badly and that's the ones that actually go and watch them play. They know that we will still be there, still be buying shirts, still taking our kids etc whatever they do to upset us. The business of the foreign tours has been to ingratiate themselves with people who, quite frankly, would be just as happy wearing a Manchester United shirt as an Arsenal one. Contrast the nature of the fan events on the pre-season tours with the utter rubbish that is "Members Day" at the stadium. Arsenal are happy to think that they need only pay lip service to the match-going supporter.
Plenty of people have travelled a long way to see the players, and spent a lot of money in the process (some of them have gone from New York to Austria to follow the team) and, despite all the protestations of the fans being important, it seems that Arsene Wenger has no respect for the supporters whatsoever. We are the great unwashed and he wants his players cocooned away from all of us. Arsenal should be ashamed that they locked out the supporters this morning. It remains to be seen what will happen for the rest of the week.
Posted by DvbrisG at Tuesday, July 29, 2014