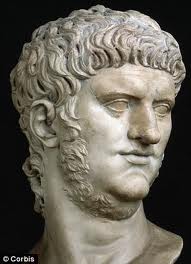 Emperor Nero - has the look of Arsene Wenger about him

Arsene Wenger created the greatest Arsenal team in living memory and put the Club among the elite of World football. He developed some of the best players in the World in Henry, Vieira, Petit, Pires, Dennis Bergkamp, Ashley Cole and Cesc Fabregas while they were at Arsenal. We won trophies in great style, with fast, attacking and exciting football that everyone else envied. It was all topped off by going through an entire season without losing in the Premier League, amid a 49 match unbeaten run. All of this makes the current situation more tragic and depressing. It is hard not to think that everything we have witnessed was a creation of the Manager - he built it - and now he is destroying it or, rather, allowing it to fall around him.
We left Highbury in 2006 at the behest of Arsene Wenger. He persuaded the Board that we had to move in order "to compete in the transfer market." This is something we were told over and over again as the main reason for leaving our home. The arrival of Roman Abramovich (and subsequently Man City's owners) may have coloured this a little, but we are no nearer to competing for the major stars than we ever have been - Liverpool and Manchester United are able to buy players, so why not Arsenal? I saw some stats on Sky Sports the other day where they showed Arsenal's record transfer fee to be £15m for Andrey Arshavin. In the current football landscape how can a Club of Arsenal's stature not have signed a World Class player for a significant fee? Okay, spending big money doesn't guarantee the player will be a success, but I would argue you are far more likely to see quality from a £20m+ player than a 17 year-old from Southampton, or a boy from Charlton Athletic. Arsene says he looks at the "quality of the player rather than the price tag" but I would suggest a big price generally means a quality player (the English market may be inflated - with Andy Carroll being the most obvious example - but if that's the going rate then it's what you must pay to improve).
I am not upset at losing Fabregas and Nasri (especially Nasri, though the fee we have got for Fabregas is an insult to the Arsenal supporters) as long as the money is put in to buying proper replacements. By saying that I mean signing established names - Sneijder, Schweinsteiger, Mata ( who is young but very experienced at the top level already) to name just a few. The signing of a big name for big money gives everyone a boost, players and fans alike. We continue to be "linked" with unknown Frenchmen/Africans, when what we are crying out for is established players. This particularly applies to defensive areas. Why are we having to rely on a child like Frimpong to stand in for Alex Song this week when we could have had Scott Parker in the team already? (Arsene would tell us that such a signing would "kill" Frimpong, while completely overlooking the fact that, if the lad is that good, he will end up ahead of the likes of Song and Parker regardless). We need an experienced "Premier League" player in the back four (at least one). I have never had a problem with Arsenal's foreign legion as English players are generally inferior (just look at the England team and their record) but right now we need a player like Cahill to come in and simply defend properly - in an English way, if you will.
Arsene promised us a "busy Summer" and has been adamant that he has worked long in to the night all through the close season. So what has he been doing? He tells us we have scouts all over the World looking for players - why? Surely he doesn't need a scout to tell him that the likes of Sneijder are top class players who could be successful in the Premier League - remember the last World-Class Dutchman we signed from Internazionale? He wasn't a bad player as I recall, and you didn't need some scout or other to tell you so. We are now less than two weeks away from the end of the transfer window and yet we are signing nobody.
As I said at the start of this post Arsene Wenger built the modern Arsenal, but now he has more than a touch of the Emperor Nero about him. He seems to be burying his head in the sand as his Empire crumbles all around him. For some reason all we get are the same old soundbites about "super quality" and how he will only sign players "who will improve us as a squad." While he continues to do this Arsenal are in real danger of slipping from that elite I mentioned earlier (assuming we haven't already done so). All of this could yet be changed if only he would get on and spend the millions that are at his disposal. It is the only way for Wenger to save Arsenal and himself, and he must do it now or face the consequences, and the ignominy of being sacked as Arsenal Manager.


Please take the time to vote on the latest poll on the right of this page. You can also join the Facebook group - It's MY Arsenal Opinion - where discussion has been healthy this past couple of weeks. I am on Twitter and would welcome you to follow me and discuss all things Arsenal on there too - @ARSENALDvbrisG. Alternatively register through www.blogger.com and follow the site itself and leave your comments below each post. Thanks, as ever, for reading.