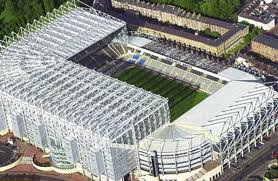 All Gooner eyes on St James' tomorrow
The season is here and Arsenal start with a very tough away game at St James' Park. Leaving aside the disaster that befell the players here last season it is a daunting prospect to play the opening fixture in front of a full house of screaming Geordies. The only bright spot is that Newcastle fans are scratching their heads at the goings on in their Club just as much as we are.
Arsenal go in to the game with good news on the injury front, which is just as well with Fabregas and Nasri on their way out. Theo Walcott, Kieran Gibbs, Aaron Ramsey, Thomas Vermaelen and Robin Van Persie all appear to be fit to play. Having said that I am very concerned about the position with Jack Wilshere who, we are now told, has had his foot placed in to a protective boot (he was out for "a few days" when the injury occurred - remember Rosicky and Vermaelen?) For some reason Nicklas Bendtner is not likely to be involved despite the fact that he remains an Arsenal player. Emmanuel Eboue, meanwhile, seems to have played his final game for the Club after he was left off the official list of Arsenal squad numbers for the season (Gervinho has taken Eboue's number 27 shirt). I also expect Alex Oxlade-Chamberlain to be among the Arsenal subs tomorrow, along with Emmanuel Frimpong.
Robin Van Persie will skipper the side in Fabregas' absence, though Arsene Wenger says no decision is made on a new Club Captain. I think this sort of sums up where we are right now with a complete lack of leadership both on the pitch and off. My personal view is that Wenger should make Wilshere the Captain of Arsenal. I don't care how young he is - Tony Adams was a mere boy when he took over and it didn't do him, or Arsenal, too much harm. I suspect, however, that RVP will step in to the role as Wenger tries to encourage our last remaining world-class player to stay with the Club.
I think we might line up a little like this: Szczesny - Sagna, Vermaelen, Djourou, Gibbs - Song, Ramsey, Rosicky - Arshavin, Van Persie, Gervinho
Newcastle, as I mentioned above, are not without their own issues. The soap opera involving the way Newcastle is run continues with Joey Barton in open warfare with his employers. Club Captain Kevin Nolan was sold earlier in the Summer and regular left-back Jose Enrique has gone to Liverpool. All of this has been done against a backdrop of not much investment in the side. Having said that they have one of the best combative midfield players in the Premier League in Tiote, while the much maligned Shola Ameobi is just the sort of player that can give our defence all sorts of trouble.
Arsenal will need to take advantage of Newcastle's upheaval to get a result at St James' Park. However I don't think the players can possibly be in the right frame of mind going in to the game tomorrow. Let's remember that these are almost the exact same set of players that finished last season and their confidence was shot to pieces. Too many of them are not of the top standard required to compete for trophies, and I suspect they know it themselves. If someone offered me a draw right now I'd probably take it, and that really shouldn't be the case with an Arsenal team.
There is likely to be massive fall out from events with regards to Fabregas and Nasri over the next few days. I laughed yesterday when Wenger said it is better if you have your business done before the season begins, yet nothing happens at Arsenal (unless you count the announcement this evening of Joel Campbell's arrival - a 19 year old striker who's player eight games in the Costa Rican Premier League!) I was amazed this morning to hear the Manager still claiming that the two might stay - he really is turning in to Comical Ali from the end of Saddam's reign in Iraq.
Having said all of that about the Manager we must get behind the players that remain. It is not their fault that the Club is in this position going in to a new season. The minute they pull on the red and white shirt they become the representative of all of us on the football field. If we are to get through this early season mess in a healthy position then the boys will need our help. Get behind them and remember this:

"WE ARE THE ARSENAL."