Respect must be earned, Match Of The Day is an insult 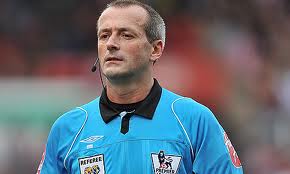 Atkinson - typifies referees today, but is he incompetent or is he a cheat?

On the first weekend of the Football League season I watched two games on Sky and was really impressed by the displays from the referees. The two men in question were always up with the play and the way they controlled the game and the players was in stark contrast to anything seen in the Premier League over the past few years. Unusually for games on Sky the matches were being officiated by men who are not among the Premier League elite names. The most noticeable thing for me was the way in which they went about booking players. There were no histrionics, no “look at me, I’m in charge” nonsense, and no turning towards the camera in order that the best side of your fake tan gets seen by the viewers. There was also no hesitation in booking for a dodgy challenge. In the AFC Wimbledon v Bristol Rovers match there was a booking inside two minutes for the Dons’ Captain who had made his second foul in quick succession. The way in which the ref dealt with it (calmly and without drama) saw the match settle down in to a superb game of football.
Let’s contrast this, shall we, with the utter dross we’ve seen from officials over the first two weeks of the Premier League. The first thing to say is that refereeing standards slipped dramatically with the formation of the Premier League and the appointment of “elite” referees. Suddenly referees became names and faces that were recognised. Certain individuals, like Graham Poll and Jeff Winter, now considered themselves celebrities and are still playing on it today. When I was growing up you only ever knew the referee who got the FA Cup Final (usually as they retired) and whoever went to the World Cup. Now we have the likes of Howard Webb and Martin Atkinson and Andre Marriner etc who are in a position to make cock-up after cock-up every week and yet are beyond reproach. Yesterday we were victims again of these muppets as Atkinson and his linesman failed to do their job properly (don’t forget that Atkinson and his cohort combined to cost us a winning goal at home to Sunderland earlier this year by giving a non-existent offside and then failing to spot a clear penalty – incompetent or dishonest? I know what I believe). Watching last night’s Match Of The Day I was not surprised to see Webb completely cocking things up in the North-East derby (more on that below). He sees what he wants to see and fails to deal with serious foul play time and time again. While doing so he is also making absolutely certain that he is the centre of attention in the game. This can not be right. Decision after decision is made and is shown to be incorrect. What is the punishment? An occasional game in the lower divisions? Why should paying fans at that level have to suffer these idiots in their matches? Referees are now well-paid professionals yet they are, at best, incompetent. I honestly believe there is something far more sinister with some of them – Arsenal’s record with decisions this past year or so certainly warrants some investigation. The FA talks about “Respect” and how players have a responsibility to show some towards the referee. They overlook the fact that respect is earned, not given. Why should somebody get respect simply by putting on a black shirt and carrying a whistle? I remember David Elleray telling me once that he hated refereeing Dennis Bergkamp as he wouldn’t listen to him – I suspect it had something to do with Elleray’s overbearing school-teacher routine clashing with the sublime talent of someone who had no reason to show respect to such a little weasel.

I watched Match Of The Day last night to see what exactly happened with the goals and the red card yesterday. As soon as it came on I realised we wouldn’t get a sympathetic and unbiased response from a panel of Lineker, Hansen and Lawrenson (not weighted towards Liverpool at all). The highlights confirmed my suspicion that Frimpong’s first yellow card was an absolute joke. Questions really should be asked how he was booked for that, yet John Terry gets the same for grabbing Peter Odemwingie by the throat (left out of the BBC highlights from Chelsea’s game). I also had it confirmed that the first goal was clearly offside, though not to Hansen who said “it might have been marginally offside.” They also claimed that Frimpong should have got a straight red for the foul that got him his second booking. Frimpong didn’t have his foot especially high and had raised it to block the ball, with Lucas kicking on to the underside of his boot in his follow-through (again Chelsea’s highlights were edited to ignore a heinous Ashley Cole foul on Odemwingie moments after the Terry incident). It was simply one of those things, and certainly never a straight red (did you know that Martin Atkinson has sent off more Arsenal players than those from other clubs in his career?)
Aside of all that, and the thing that has really got me writing about it, is the double standards of the analysis. Firstly we had to sit through a Hansen montage of how good Jose Enrique was. This was illustrated at one point by a clip of him shepherding Theo Walcott to the touchline and then making a good tackle, thus showing his good defending. This was followed immediately by a clip of Enrique going forward and being dealt with in exactly the same way, by Carl Jenkinson, as Walcott had been dealt with at the other end – yet this clip was to illustrate the quality of Enrique as an attacking option. The crassness of this nonsense is almost too much to bear, and yet we pay our licence fee for such insight from these cretins.
The other bit of double standards I want to talk about came from the Newcastle match at Sunderland. In the first-half we saw Ryan Taylor blatantly elbow Asamoah Gyan in the face, right next to the linesman. Taylor went on to score the winning goal, of course. Last week Hansen and company showed (over and over again) Alex Song’s “stamp” on Barton. They made a point of saying how he “must be suspended” by the FA. I watched with interest last night as they completely ignored the Taylor elbow. This is utterly disgusting to me and is yet another example of a media bias against Arsenal. They dislike us intensely and will go out of their way to discredit Arsenal and their players and Manager, while ignoring what goes on elsewhere. It really is time for Arsene Wenger to take a leaf out of Ferguson’s book and stop giving interviews to these idiots. And the same goes for that mong Jeff Shreeves on Sky.

The blog may become a bit sporadic over the next seven weeks or so as I am having to do some training at work that requires quite a bit of concentration, and concludes with a must-pass exam. I will endeavour to post as often as possible and particularly will try to get a match preview and/or review done for all the games we play. Bear with me if it’s quiet for a few days at a time but I will update things at every possible opportunity.
Posted by DvbrisG at Sunday, August 21, 2011