Arsenal 0 - 2 Liverpool - not criticising most of those players today 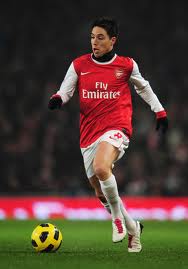 Samir Nasri - a credit to himself this afternoon
It's a bit of a strange feeling tonight. The problems in Arsenal's squad were laid bare for all to see this afternoon. It should be embarrassing for Arsene Wenger that he had to play two young men today who were left off the official squad list for the Premier League when it was announced last Friday. He also had to bring on Nicklas Bendtner ahead of Chamakh, so poor was the Moroccan on Tuesday. Having said that the only two players I can possibly bring myself to criticise this evening are Arshavin and Walcott. In short they were an absolute disgrace. Theo has had plenty of stinkers in his time but today was the absolute end as far as I'm concerned. If Alex Chamberlain is the talent the Manager tells us he is then he should be in the side this Wednesday in Udine. Carl Jenkinson was always going to be targeted by Liverpool on his debut and yet he got no help whatsoever from Walcott. Jenkinson had a very decent game, especially in the second-half, despite suffering some obviously painful cramp towards the end of the match. Arshavin constantly gave the ball away and looked his usual disinterested self throughout. He should also be left out of the side from now on. It is ironic that, in a game where we were down to bare bones, our worst performers were in an area of the pitch where we are pretty well off, and supposedly two of our experienced players.
At the back we lost Laurent Koscielny with a back problem. Ignasi Miquel (anyone know where Squillaci is? anyone care?) came on and I thought he was outstanding. Thomas Vermaelen (man of the match for me) marshaled him superbly while putting Andy Carroll firmly in his pocket. Vermaelen's performance showed what we seriously missed last season, and why it is so important to bring in some quality alongside him, and as cover for him. Bacary Sagna showed he is quality anywhere in the back four, while Szczesny commanded his area once more. I'll get to the goals a bit later but what can't be denied is that those who were playing in defence today did pretty damn well in the circumstances.
In midfield I thought Aaron Ramsey had a mediocre game, though I can't claim he wasn't trying, unlike Walcott and Arshavin. I still think there are some mental issues with Ramsey as I felt he avoided a tackle on more than one occasion. The other two players in midfield were outstanding today. Emmanuel Frimpong got sent off, but not before serving notice on Alex Song that he is going to press him for a place in the side (though I still would like to see some genuine quality in the side in place of Song). I thought Frimpong was all-action today, and more than once he roused the crowd through sheer persistence and hard graft. His first booking was a joke. His second I would like to see again - the fact that I saw it at the time puts me in a position of advantage over the referee. I can tell you that Martin Atkinson did not see the incident at all. He was facing in the opposite direction so you have to question how he came to a decision that changed the game completely. Arsenal's other midfielder today was, of course,  Samir Nasri. The mixed reception didn't really materialise as the fans got behind the team in a big way. I thought Nasri was excellent and dominated the centre of the pitch. He certainly backed the Manager's claim that he would be committed to the cause and he should take great credit in the circumstances. There are some reports that the Man City deal has broken down this evening, but that's really only any good to Arsenal if he signs a contract.
So what about the goals then? The first thing to say is that Liverpool brought on their two best players, for me, in Suarez and Meireles. Against ten men and an inexperienced and tired defence we were always going to get problems from that pair. However, that can not disguise the fact that the first goal was offside. It was right down in front of me and Suarez was way beyond the last defender. How the linesman can think he wasn't interfering with play I really don't know. The only reason Ignasi Miquel had to try to clear the ball was to stop Suarez getting to it. Yet again we were robbed. We may have gone on to concede before the end anyway but I would suggest you're far more likely to hang on to a goalless draw if it's still 0-0 than if you're 1-0 down. The second goal is simply what happens when you're chasing, no blame attached to anyone.
As I said earlier it's an odd feeling as the players that were on the pitch were full of effort. Anyone who booed the team at the end should look long and hard at themselves tonight. If you want to boo and criticise then do it to the Manager whose transfer policy is responsible for us having to watch the squad so depleted it includes guys not worthy of a number just a week ago. As my Italian friend (a man who sees the best part of 20 games a season, home and away) put it to me before the game "What do we want with saving money? We're not a f***ing bank!" Another long week lies ahead, with a seriously crucial game on Wednesday. Any new signing (stop laughing) would not be eligible on Wednesday, but that doesn't mean three or four players shouldn't be brought in before the squad flies to Udine on Tuesday afternoon.
Posted by DvbrisG at Saturday, August 20, 2011